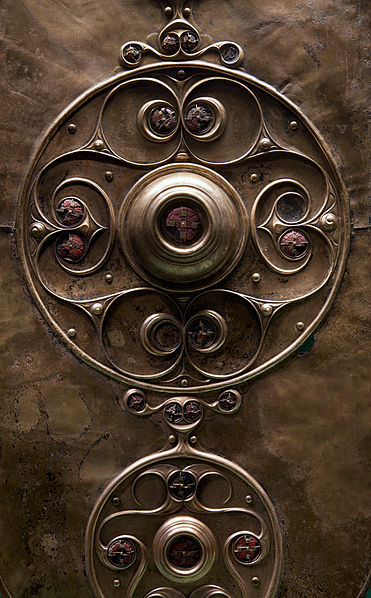 My guest today is Jean Gill, here to tell us more about her fantastic Orkney saga and the Viking women  in her novel.

Meek and anonymous or shield-maidens laying about them with axes? What were Viking women really like? These were the questions in my mind when I started researching 12th century Viking Orkney so I could inhabit a society new to me and write the story that had to be told. A story that began for me in the prehistoric burial chamber of Maehowe on Mainland, Orkney, when the guide said the magic words, ‘12th century’ and I realised that the graffiti on the walls around me were Viking runes, carved in my special period.

In The Troubadours series, I included the adventures of amazing real and fictional women in 12th century France, Spain, the Holy Land and Wales. Could I do justice to the medieval women who’d lived on these bleak islands that were a part of Norway, about which I knew nothing? One of the runic messages on that wall was Jórsalaheim-farers broke Orkhaugr. Carved by Hlif, the Jarl’s housekeeper.

Jórsalaheim-farers means Jerusalem-farers, in other words, pilgrims. I already knew that the Jarl (Earl) of Orkney set sail for Jerusalem in 1150 or 1151 and called in at Narbonne en route, where he fell in love with its hereditary lady ruler Viscomtesse Ermenarda (a key character and episode in my novel Song at Dawn).
Orkhaugr means the prehistoric tomb of Maeshowe, which was broken into during the 12th century. And Hlif is a woman’s name. These runes were carved by a woman named Hlif, who was housekeeper to the Earl of Orkney. Not only was this woman carving runes but she also had an important profession: housekeeper or even steward, if we try to remove the sexist bias in the choice of term; and she was recording a historical event. The pilgrims broke into the tomb. I can’t tell you how exciting this was, how much it challenged the ‘meek and anonymous’ notion of Viking women while not suggesting a murderous shield-maiden. Hlif might well have used an axe to carve the runes, as the archaelogists only say that different tools were used for the various messages. But I did not imagine her wielding an axe on raiding and pillaging trips. She had power as manager of the Earl’s Bu (Hall) and the notion that women generally trained as warriors strikes me as unlikely. There is no evidence that they didn’t, and the mythical Valkyries are indeed warrior-maidens, but I am enough in awe of the real, recorded achievements of women without writing them into shield-wall warfare. 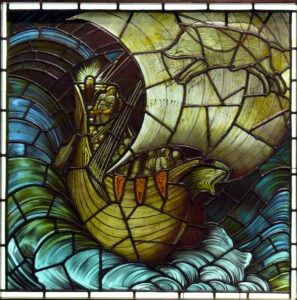 In the last twenty years there have been some stunning archeological finds, from boat burials to jewellery hoards, that have added complexity to the previous image of Vikings as murdering raiders. The current picture of traders and travellers, whose colonies included eastern Europe and parts of England, includes active roles for women and many surprises.

Women had property rights, even within marriage, and could demand a divorce. Those are more
rights than women had in 19 th century Britain.

Women travelled. They were part of new colonies and they sailed on merchant ships

Women were spinners and weavers, making the sails so vital for Viking culture. ‘Spinster’ was a title to be proud of in a society where men’s fates were decided by the mythical (female) Norns.

Women were farmers and managers, especially when their menfolk were on raiding trips in the spring and summer.

Women with magical powers (the volva) were respected and consulted by gods and men in myths and sagas. Wands have been found in burial goods beside women’s skeletons but not beside men’s. ‘Witches’ might have been feared but they were also revered and not persecuted as in later British Christian history.

Some women thralls (slaves) integrated into society and married Viking men. It was not considered a stigma for a Viking to have an Irish thrall mother or grandmother. Hitting a woman was considered unmanly and, in the sagas, led to divorce or revenge.

This is not to say that there was sexual equality. Far from it! But Viking women did have more status and rights in society than did their Anglo-Saxon counterparts, which gave me enough confidence to portray Hlif exactly as I saw her. That one runic message is history’s only record of Hlif. I followed one archaeologist’s speculation on who her father might be, based on her name and the date of the runic graffiti – mid 12th century – and she is real to me. This is the first time Skarfr and the reader meet Hlif.

Extract from Chapter 2, The Ring Breaker 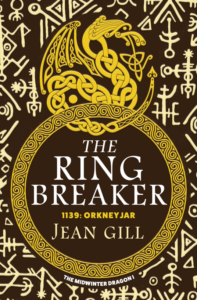 ‘What are you doing?’
Skarfr looked up and blinked. Bright-haired against the sunshine, a girl screwed her face up in puzzlement, making her eyes so small he could barely distinguish their colour. Stormy grey. Even against the sun, her skin was curdled milk, speckled as Botolf’s roan pony with so many freckles they joined into blotches. He’d never seen a girl so ugly but then he hadn’t seen many girls at all. Brigid’s, face scored with suffering and fatigue, occasionally bore traces of the raven-haired beauty she must once have been.
‘Nothing,’ he replied. At which stupid reply, the girl opened her eyes fully, the better to bestow contempt on him.
‘You shouldn’t talk to me. Or even be seen with me,’ she informed him with hauteur. ‘I’m going tskim stones.’
While Skarfr still sought appropriate words and found none, she selected pebbles carefully, for flatness and size, and walked into the waves. She was barefoot like himself but her girl’s apparel was less convenient for paddling. Although she’d rearranged her wool belt to hitch up both her pinafore overdress and her longer undergown, the hems of both must be getting wet.

She didn’t seem to care about anything but her success in beating her own numbers. ‘Not a good start,’ she muttered, as a marbled grey pebble skipped three times and sank. When she achieved seven skips, she gave a humph of satisfaction. ‘I’ll stop there.’
She jiggled her remaining stones.
Then hurled one straight at a diving cormorant.
‘No!’ shouted Skarfr, suddenly freed from his paralysis. He rushed her from behind, made her stumble and lose the rest of her pebbles. Her clothes dipped full into an oncoming wave, that broke around them in a froth of laughter, mimicking the girl.

She pushed past him to get out of the water. ‘What’s the matter with you?’
‘Nothing,’ he replied, flushing. He couldn’t help glancing out to sea. Spear-straight, his cormorant dived again. In the time it took a stone to skip seven times, she surged up, far from where she’d entered the water, silver wriggling in her mouth before she contorted her long throat and swallowed the fish. She was
fine.
The girl was staring at him. He felt like a fish wriggling.
‘Do you always spoil the fun?’ she demanded, her face as red as her hair, her clothes dripping.
‘No,’ he said.
He considered his answer then, ‘Yes,’ he said.
Then, ‘That’s none of your business.’
He liked that answer best because he could repeat it to any other question she asked.

I really recommend this book. READ MY REVIEW

BUY THE BOOK: The store of your choice