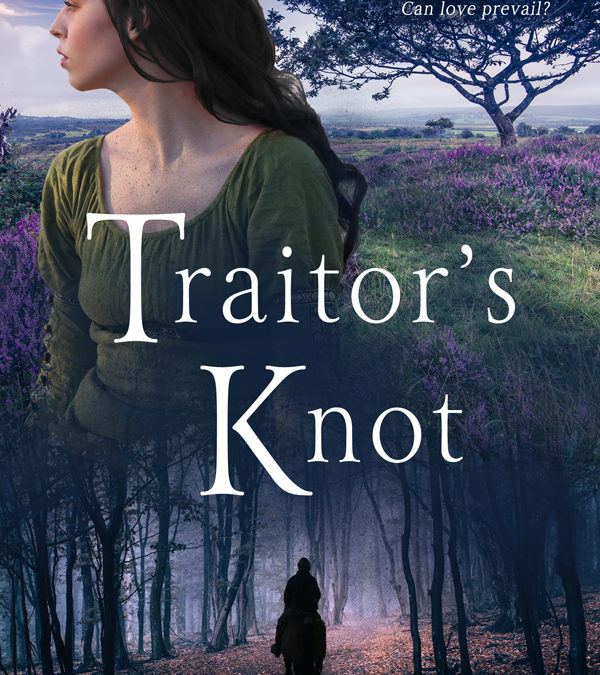 I’ve already read this book, and Severed Knot, the one that follows it, and I’m halfway through Rebel’s Knot, the last in the series. All three books are immaculately researched, gripping and well-worth anyone’s money. Do start with this excerpt to get a flavour of the treats to come:

Elizabeth pushed through the knot of women pressing to take her place at the stall. “Excuse me,” she gasped, and they cleared the way for her and the ugly yellow ribbon.

Just as she reached the last matron, a demon in the form of a Puritan Roundhead materialised in her path.

She pressed her hand to her chest. “Lieutenant—you surprised me.”

“A pleasant one, I trust,” he said. “I’m glad I found you. There is something I thought you might find of interest.” Without waiting for a reply, he took her by the elbow and led her away from the haberdasher’s stall. “A godly woman does not gild herself with laces and frills.”

Elizabeth’s expression hardened. She had every right to visit any shop she desired. Next he would criticise her for frequenting the bookseller’s. Would they hang her for choking a constable with a mustard-coloured ribbon?

“I would lower your voice, Lieutenant. Mistress Rathbone will not thank you for your comments.”

Hammond led her to the draper’s with bolts of broadcloth laid out in display—various shades of grey, charcoal, black and mud brown. He held up a corner of the wool. “Plain, simple fabrics—these are pleasing to the Lord. We must not draw attention to our corrupt body.”

“And what of your russet feathers, Lieutenant?” Elizabeth pointed to his coat. “Methinks that this colour draws sufficient attention to the material world.”

Rather than take offence, he smiled. “A banner for the godly. My lord Cromwell has seen fit to garb us in this fashion. Come.”

Hammond led her away, but to her relief, he did not head for the Chequer. “I should tell you that I’m leaving Warwick for apace.”

Elizabeth choked down her excitement. “Indeed? The town will not be the same. Are you returning to London? I recall that you missed it keenly.”

“Nothing of the sort,” he said. “I shan’t be leaving the county. Sir Richard has entrusted me to oversee a particularly delicate enterprise.”

Elizabeth’s instincts prickled. This sounded ominous, and anything that made Hammond look smug as a cat in cream could not be good. She feared it might have something to do with James. “Might I enquire as to the nature of this business, Lieutenant? I hope it shan’t be a dangerous enterprise?”

“Your concern warms me a great deal, my dear.”

The softening in his expression made Elizabeth squirm. She hated to encourage the man, but if it could protect James . . .

“Unfortunately, I’m not at liberty to explain,” Hammond said. “Suffice it to say that if we are successful, a mortal blow will be struck to the Commonwealth’s enemies.”

Elizabeth’s worry increased. The only enemy to the Commonwealth that she knew had stolen her heart. She had to warn James. “I wish you joy in your mission, Lieutenant. I must take my leave of you. My aunt wasn’t feeling well this day, and I’m anxious to return to her side.”

“But you haven’t seen my treat.”

“A treat?” The hairs on the back of her neck lifted.

Hammond led her down a side street lined by a row of town houses and away from the din of the market. A waiting company of dragoons clustered around the glover’s house. Hammond watched her as though savouring her reaction.

“I promised you something of interest.”

One of the dragoons presented himself to Hammond. “Everything is secure inside, Lieutenant.”

“Very good.” Hammond looked around. “And the wagon?” Before the man could answer, a conveyance with thick bars turned the corner and rumbled to a halt before the house. “Excellent timing.”

“Why is the gaol cart here?” Elizabeth asked.

“Patience is a virtue, mistress.”

A piercing shriek and shattering glass broke the expectant hush. Barked commands drowned out a series of angry shouts. The front door flew open, and a pair of dragoons burst from the house dragging a young woman. Tears streamed down her face, and she clutched a sheet to cover her nakedness as the soldiers marched her to the cart. Elizabeth recognised her as the glover’s maid.

The woman stumbled and spilled to the sidewalk, exposing small, quivering breasts. “Please!” she cried as they hauled her to her feet.

Shocked, Elizabeth watched them push the naked woman into the wagon. One of the soldiers tossed the sheet back to her.

Next the dragoons marched out the second prisoner—the glover. The man stumbled out of his home, clad only in a shirt. The garment barely covered his naked loins. Normally fond of gawking at the young maids, he no longer leered.

“Adultery and fornication,” he replied. “They will spend time in the arms of the stocks. We must prepare to don the mantle of the New Jerusalem. There is no room for heretics and the ungodly in this new order.”

Elizabeth’s stomach turned. By now, a small crowd had flooded in from the market. A few of the bolder men hovered near the wagon to get a good look at the prisoners. Laughter and jeering rippled through the crowd. Elizabeth found it difficult to watch. “What of mercy?”

“Mercy? Would that please you?” Hammond’s smile widened. “I have shown them mercy. Had we arrested them in another fortnight, they’d both be in the gaol.”

Royalist officer James Hart refuses to accept the tyranny of the new government after the execution of King Charles I, and to raise funds for the restoration of the king’s son, he takes to the road as a highwayman.

Elizabeth Seton has long been shunned for being a traitor’s daughter. In the midst of the new order, she risks her life by sheltering fugitives from Parliament in a garrison town. But her attempts to rebuild her life are threatened, first by her own sense of injustice, then by falling in love with an outlaw.

The lovers’ loyalty is tested through war, defeat and separation. James must fight his way back to the woman he loves, while Elizabeth will do anything to save him, even if it means sacrificing herself.

My Review of Traitor’s Knot:

5.0 out of 5 stars Great blend of fact and fiction
This is a wonderful novel – richly detailed and full of the jargon and phraseology of the period. Set just as Prince Charles (later to be Charles II) is making his escape during the English Civil Wars, it centres around the difficult choices and strained allegiances that marked the tension of the Interregnum.
James Hart, a highwayman, (modelled on the real-life Royalist highwaymen of the day such as Hind) is defying Cromwell’s Oath of Allegiance, and making his own rules by not only robbing the rich to feed the poor, but by continuing to support the Crown against the Commonwealth. He falls for Elizabeth Seton, a herbalist and healer, who has chosen to leave her family for a distant aunt, rather than be condemned to life in her sister’s staunchly Puritanical household. When the two characters meet, they find they have much in common, and the romance soon grows wings. Elizabeth’s aunt is a supporter of the Knot, a fictional organisation that gives safe houses to Catholic recusants, and Elizabeth is drawn into helping them. However, The King needs James’s assistance, and our highwayman hero must leave Elizabeth prey to another suitor – the preacher who will show no mercy if he were to uncover a royalist, and a woman who supports papists, in their midst.
Cryssa Bazos is equally at home writing battle scenes as writing romance, and the pace keeps the reader turning the pages. The book is chock-full of historical facts, and these are seamlessly woven into the plot. Fans of English Civil War fiction will lap this up, and it would also suit readers who enjoy classic historical fiction by for example Kathleen Winsor, Georgette Heyer, or Pamela Belle as well as the thrillers of Michael Arnold.

Cryssa Bazos is an award-winning historical fiction author and a seventeenth century enthusiast. Her debut novel, Traitor’s Knot is the Medalist winner of the 2017 New Apple Award for Historical Fiction, a finalist for the 2018 EPIC eBook Awards for Historical Romance. Her second novel, Severed Knot, is a B.R.A.G Medallion Honoree and a finalist for the 2019 Chaucer Award. A forthcoming third book in the standalone series, Rebel’s Knot, will be published November 2021. 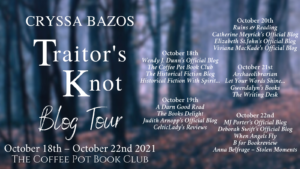 Keep an eye out on this blog for my review of Rebel’s Knot – coming very soon!