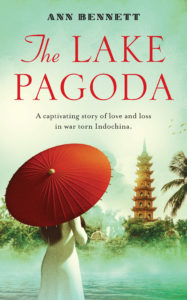 Read this stunning extract from The Lake Pagoda by Ann Bennett

Arielle pulled her shawl tightly around her shoulders and stepped out of the entrance to the apartment building and onto the broad pavement of Boulevard St Germaine. An icy wind whipped around her, driving up from the River Seine, funnelled by the tall buildings. She shivered and gritted her teeth against the weather. It was so alien to her, this biting cold air that chilled you to the marrow of your bones. In her native Hanoi, the temperature, even in the cooler months, was always comfortable and she was so used to the sultry heat of that city that this Paris winter was a cruel shock.

Even so, she needed to get out. She couldn’t stay inside the stuffy, cramped apartment a moment longer, and while her father was sleeping it was difficult to do anything in that tiny space without disturbing him. So, each morning she left the building to tramp the streets of this alien city, exploring the alleys of the Latin Quarter, the cobbled lanes and churches of the île de la Cité, the boulevards and gardens of the Eighth Arondissement. And as she walked, she watched the stylish Parisians going about their business, dashing to and fro in fashionable clothes, getting out of taxis, riding on trams, pouring down the steps of the metro. She was trying to understand her new home, to find her place in it, to find some meaningful connection with this great, intimidating city. And there was something else she was searching for too.

Now, as she braced herself against the wind and started walking along the boulevard away from the apartment, she glanced guiltily back up at the windows on the third floor. She always worried when she left Papa alone. What if he were to wake up and call out for her? What if he had one of his coughing fits? But he always encouraged her to go. ‘Go on, explore while I’m resting. You need to get to know the place. You can’t stay cooped up with a sick old man all day. I’ll be fine on my own.’ But still she worried.

She carried on down the road, making for the market in Rue Mouffetard. Cars and buses crawled past belting out fumes. Through the lines of slow-moving traffic wove bicycles and pony traps, army jeeps too. It felt so bleak here and so dull after the vibrant colours of Hanoi; the plane trees that lined the pavements had lost their leaves, their branches stark against the tall, pale buildings, and the sky between them was an ominous slate grey.

She walked past a couple of bus stops without pausing. She’d never yet got on a bus in Paris; she had no idea how they worked and was afraid of drawing attention to herself, even though she told herself it was perfectly safe here to do so. Years of having to keep a low profile in Hanoi had made her fearful of attention from anyone. Not that she need worry here in Paris, people barely noticed her. She could walk in the midst of a crowd as if she didn’t exist. And if anyone’s eyes did happen to light on her, seeing her dark skin and black hair they would quickly flick away, for she was half Vietnamese and it was as if she were invisible to them; a nobody.

Indochina 1945: Arielle, who is half-French, half-Vietnamese, is working as a secretary for the French colonial government when the Japanese storm Hanoi. Although her Asian blood spares her from imprisonment, she is forced to work for the occupiers. The Viet Minh threaten to reveal dark secrets from her past if she won’t pass them information from her new masters.

Drawn ever deeper into the rebels’ dangerous world, will Arielle ever escape the torment of her past? Or will she find love amidst the turmoil of war?

A novel of love, loss, war, and survival against all odds.

BUY THE BOOK or read on #KindleUnlimited 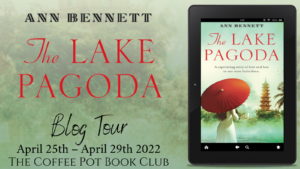 Ann Bennett was born in Pury End, a small village in Northamptonshire, UK and now lives in Surrey. Her first book, A Daughter’s Quest, originally published as Bamboo Heart, was inspired by her father’s experience as a prisoner of war on the Thai-Burma Railway. The Planter’s Wife (originally Bamboo Island) a Daughter’s Promise and The Homecoming, (formerly Bamboo Road), The Tea Panter’s Club and The Amulet are also about the war in South East Asia, all six making up the Echoes of Empire Collection. Ann is also author of The Runaway Sisters ,The Orphan House, and The Child Without a Home, published by Bookouture. Ann is married with three grown up sons and a granddaughter and works as a lawyer. For more details please visit www.bambooheart.co.uk  Twitter: https://twitter.com/annbennett71