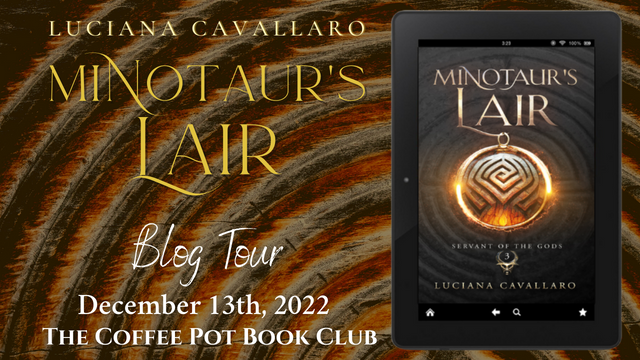 Take a look at this new historical fantasy based on Greek Mythology!

The Minotaur stirs. Evan is drugged to forget the gods’ quest.

Evan and his companions are entrapped by the Amazon Queen Antioche and her warriors. Memories and allegiances are tested. The Dark Master’s victorious revenge over the gods is almost complete. The plight of the High Priestess is precarious, her health ailing, and unable to rescue her brother and fellow Atlanteans.

The last sacred relic, secreted in the lair of the Minotaur, must be recovered or the Dark Master’s succession plans of a new god are complete. The mystical lands of Krete, the final stage of Evan’s journey, are within his grasp. He must succeed so his father, Zeus, fulfills his promise. Then there is Queen Antioche, and the precious gifts she presents him.

Will Evan return home, and what will become of his future? 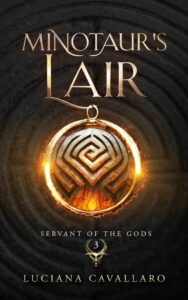 Get in touch with Luciana: https://luccav.me

Luciana Cavallaro’s alter ego is a high school teacher where she plugs away educating teenagers the merits of reading and ancient history. She often looks for a brick wall to bang her head when faced with disinterested looks from her students. She’s also a historical fantasy and thriller/suspense author, who creates fast-paced, action-packed series for her readers.

Born and raised in Western Australia, residing in Perth, Luciana loves to travel and since getting her passport at the ripe old age of twenty-four has toured parts of Europe, a legacy of her Italian heritage. She enjoys being active, going out with friends, reading and tries to grow her own vegetables. She dreams of travelling again and visiting the ancient sites that inspired her stories, that is when she’s not spending time being an unofficial stunt person and knocking herself out in the process.