Having survived a grave illness to become one of 11th-century England’s wealthiest landowners, Godgyfu of Coventry (Lady Godiva) remains forever grateful to the town whose patron saint worked such miracles. She vows to rebuild Coventry’s abbey and better the lives of its townsfolk. But the wider kingdom is descending into political turmoil, and her husband, Earl Leofric, starts to break under the strain. Godgyfu finds her own plans unravelling the moment she meets Thomas, a Benedictine novice with perverse secret desires. Three lives become dangerously entangled in a shocking web of ambition, voyeuristic lust, and horrid obsession. Can Godgyfu escape the monk’s menacing wiles and Leofric’s betrayals to secure her future in a changing kingdom? Perhaps, but first she faces a dark test of wills leading her perilously closer to a legendary ride… 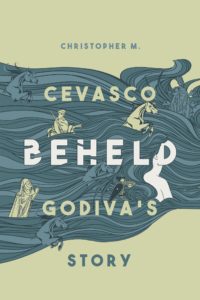 Christopher M. Cevasco was born in New Jersey and spent a memorable decade in Brooklyn, New York, but he feels most at home in medieval England, Normandy, Norway, and Greenland. A lifelong passion for history and fiction led him to earn degrees in Medieval Studies and English and later to embark upon a writing career that merges these two loves.

Chris was the founding editor of the award-winning Paradox: The Magazine of Historical and Speculative Fiction from 2003 to 2009. His own short stories appear in Black Static, Beneath Ceaseless Skies, Distant Echoes (Corazon Books, UK), and the Prime Books anthologies Shades of Blue and Gray: Ghosts of the Civil War and Zombies: Shambling Through the Ages.

A long-time member of the Historical Novel Society, Chris currently serves on the society’s North American conference board as registration chair for the upcoming 2023 conference in San Antonio, Texas. Chris lives with his wife and their two children in Myrtle Beach, South Carolina.