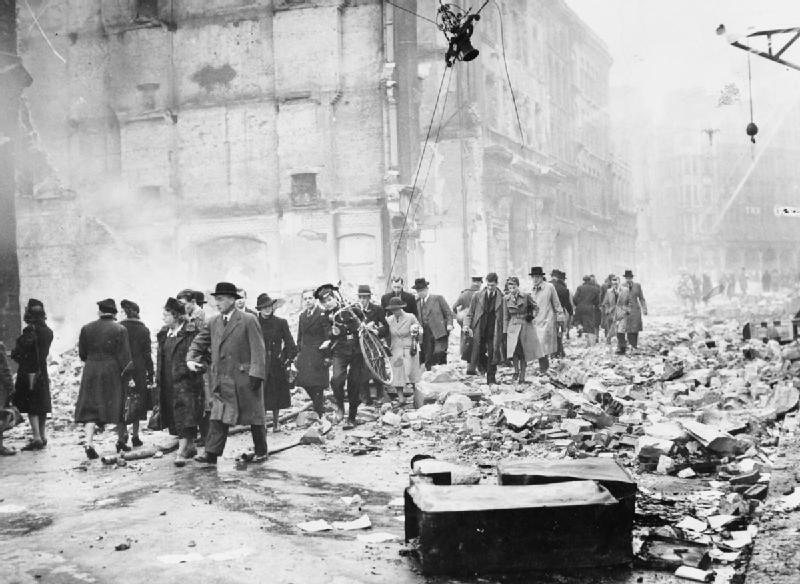 Today I welcome Richard Marrison to my blog to give us his take on the presidents of two of the most influential nations in WW2. Richard is from Budapest, Hungary and holds a degree in Cultural Anthropology from Eötvös Loránd University. Over to Richard:

World War 2, 1939-1945, was one of the most significant and destructive global conflicts that resulted in about 70-85 million casualties. A major part of the world was involved in this war directly or indirectly.

Two rival alliances were formed, namely the Allies and the Axis powers. The principal combatants included Germany, Italy, and Japan forming the Axis powers and France, Great Britain, the United States, and the Soviet Union forming the Allies. In addition to the military aspect of war, politics was also an important factor that affected war decisions. The head of state of every nation held the ultimate decision power as to what extent the nation would participate in a wartime scenario. They were responsible for the direction and supervision of the military force as the top-level authority. Some nations’ presidents played a crucial role during the second world war. The consequential decisions made and actions taken by these authoritative individuals created an impact during the time of war. Underneath, we discuss the presidents of two of the most influential nations during World War 2 who, at that time, led their nations to war.

The President of Germany during World War 2

Adolf Hitler, the president of Germany, initiated World War 2 by invading Poland on September 1, 1939. This invasion marked the beginning of the catastrophic global war. After the sudden death of Reichspräsident Paul Von Hindenburg, Adolf Hitler assumed the presidency’s powers and took over the German nation in August 1934. Hitler, who was already the Chancellor, assumed control of the powers under the title of ‘Führer und Reichskanzler’ without any regard to constitutional legality. Adolf Hitler initially served in the Bavarian army in World War 1 as a ‘Gefreiter.’ In 1918, he was gravely injured and hospitalized during the war. Hitler was reportedly furious and devastated when he learned about the Treaty of Versailles and the terms on which the war ended.

In 1921, Hitler was appointed the leader of the Nazi Party, replacing the former chairman, Anton Drexler. By this time, Hitler was consistently showing opposition towards the Treaty of Versailles. Following this leadership, he was designated as Chancellor of Germany in 1933 by Hindenburg upon the recommendation of some influential politicians. Soon after the designation, the parliament passed the Enabling Act of 1933, which granted the Chancellor the power to form and enforce laws. This was a major advantage to Hitler, who started taking relevant steps towards transforming the German Republic to Nazi Germany. After he took over as the head of the state in 1934, Hitler held the dictatorship for nearly 11 years. During the second world war, he was a significant figure and was heavily involved in military operations. Hitler chiefly initiated World War 2 by attacking Poland. Britain and France declared war on Germany after this invasion. In 1940, Germany invaded Denmark and Norway, and based on his overconfidence following these victories, Hitler started making some turbulent decisions. He started interfering in military decisions , breaching the Molotov–Ribbentrop Pact and attacking the Soviet Union, which led to disastrous results. He even appointed himself as the armed force’s commander-in-chief after this failed operation and continued to take risky offensive decisions. The downfall of the German Republic’s military position was inevitable under Hitler’s over-ambitious leadership. 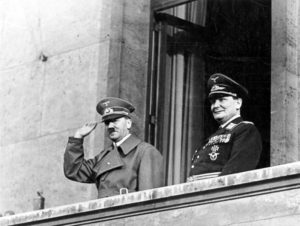 Between 1941 and 1945, Hitler’s enduring operation to bring about Jewish elimination from the nation was in progress. The Holocaust was the genocide of European Jews during the course of the World War. Somewhere around six million Jews were murdered in pogroms and mass shootings under the dictatorship of Adolf Hitler and domination of the Nazi Party. Around the end of 1944, Hitler made a last attempt to gain control  through a counter-offensive attack directed towards the American and British troops. This attempt was unsuccessful, and his efforts to negotiate peace with the US and Britain also went in vain. After the complete invasion of Berlin by the Soviet troops, Adolf Hitler and his wife Eva Braun committed suicide in the Reich Chancellery on April 30, 1945. Only two days later, on May 2, Berlin surrendered, followed by the German Republic surrendering on May 7. This was the official end of the second world war in Europe, a war that Adolf Hitler had initiated.

The President of the United States during World War 2 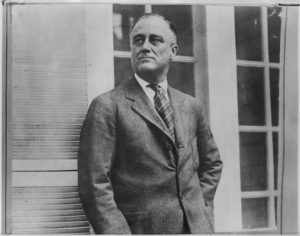 Franklin D. Roosevelt was the president of the US throughout the second world war up to nearly its end. He directed and led the country to war starting from December 8, 1941, after Japan attacked Pearl Harbor, Hawaii, causing significant damage. Roosevelt was the only president elected to office four times, beginning from March 4, 1933, until his death on April 12, 1945. He governed the country through two of the most critical events in history, the Great Depression and World War 2. Focusing on developing domestic policies during the start of his term, since he was elected amidst the Great Depression, Roosevelt inaugurated the New Deal. In 1939, when the war broke out, Roosevelt wanted to pursue the assistance of British and French military power. In a session called by Roosevelt to revoke the Neutrality Act, the isolationist leaders of Congress succeeded in repealing the primary motive of the session. However, he gained Congressional approval for the sale of arms on a cash-and-carry basis.

Roosevelt stayed firm to his decision of not rushing the nation to war, considering the high casualties the US suffered during World War 2. However, he did declare a state of national emergency and started maximizing and strengthening the US military power after the war had begun among other nations. After the surprise attack on Pearl Harbor, Roosevelt mentioned in his speech that the day of the attack was ’a date which will live in infamy’, and the US declared war on Japan. Following the entrance of the States in the war, Germany and France also declared war on the nation, to which the United States responded reciprocally. Roosevelt established a grand alliance with the nations forming the Allies from the start of the United States’ direct involvement in the war. He maintained cordial relations with the prime minister of Britain, Winston Churchill, and they even pursued the project of preliminary stage research of nuclear weapons jointly. With active wartime discussions and conferences between Roosevelt and the leaders of the United Kingdom, Soviet Union, and China, they formed a strong alliance with the prime focus of bringing Nazi Germany and other Axis Powers down. After Italy surrendered to the Allies, the German forces conceded defeat on May 8, 1945. This was followed by Japan surrendering officially on September 2, 1945, marking the end of WW2. 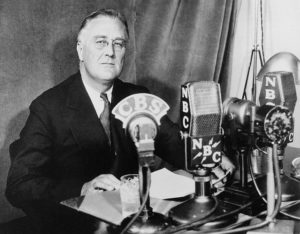 Roosevelt played a significant role in leading the nation during this destructive conflict. It would be fair to say that he eased the path of the ongoing war for his successor, Harry S. Truman. Franklin D Roosevelt, who was in a state of deteriorating health for some time already, died of a massive brain hemorrhage on April 12, 1945. The then vice-president Harry S. Truman took over the office. He directed the United States during the second world war for only a couple of months until the Axis Powers fully surrendered and the six-year-long war came to an end. The Hiroshima bombing was one of the significant attacks during World War 2 initiated by Truman after he took over as the president. Truman was re-elected after he won the 1948 presidential election. He governed the nation through the Cold War period as well. His term ended in 1953, after which he did consider running for the presidential election again but was defeated, considering his declining health and abilities.

In conclusion …
World War 2 was conjointly a conflict that arose due to the plotting and decision of many relevant figures of various nations. Adolf Hitler of Germany, Benito Mussolini of Italy, and Hirohito of Japan were the chief leaders of the Axis Powers. Similarly, Franklin D. Roosevelt of the US, Winston Churchill of Great Britain, and Joseph Stalin of the Soviet Union were the prime alliance of the Allies. Adolf Hitler’s long-planned vision led to the start of one of the most catastrophic events in history. This led to several post-war effects, which were rarely positive. In addition to the numerous casualties, the war brought turbulence in the nations’ economies, war crimes, and hunger crisis. Some of the leaders who initially led their nations to war faced an unpleasant fate. The major instances of Hitler committing suicide and Mussolini being assassinated before the war ended prove this. The end of World War 2 brought victory to the Allies, with Japan surrendering at the very end among the Axis Powers.

What is Winston Churchill best known for?
Winston Churchill served as the Prime Minister of Great Britain twice, and he led the nation to victory during World War 2. He played a major role in shaping the Allied strategy and guiding the country towards victory from the brink of defeat.

What did Hirohito do in WW2?
Hirohito, the emperor of Japan from 1926  to 1989 , initiated the invasion of China, the bombing of Pearl Harbor, and finally the surrender of Japanese troops to the Allies. He was the nation’s leader throughout World War 2 and sided with the Axis Powers officially on September 27, 1940, after signing the Tripartite Pact.

Who executed the Italian prime minister, Benito Mussolini?
Benito Mussolini and his mistress were captured and shot to death by Italian partisans on April 28, 1945. The fascist leader was caught trying to flee to Switzerland, a neutral country during WW2, after realizing the downfall of the Italian troops in front of the Allied nations.

Thank you to Richard Marrison for this useful overview. Find Richard at his own blog on History at historyten.com