This is the third in the splendid She-Wolves Trilogy and I’ve read them all. This one is about Queen Isabella, wife to Edward II. In my opinion this is the best and a fitting finale to an exploration of women and their role at court. From the opening where we are plunged into All Soul’s Night and every knock at the door could be a horror, to the end, when Isabella is alone and only contemplating the ghost of Edward, her husband and King, we are completely immersed in another world.

The novel benefits from the secondary character, Agnes, a real life stone-mason who is commissioned to carve her tomb and is to tell Isabella’s story and make sure we know the truth. Out in the land, England is recovering from the devastation of the Black Death – something that makes these characters’ lives seem even more fragile., Much of court life is political maneuvering and Carol McGrath manages to keep the tensions up by the use of her characters and their personal concerns. For example, at one point Isabella bemoans the fact that her husband was always happiest away from his castle duties and insists on mixing with the peasants, something she thinks beneath him. Isabella is dismayed too by his choice of companions. Those people who, like me, have studied Shakespeare’s Edward II will know of Piers Gaveston, and he features in this book along with another of the King’s  favourites, Hugh Despenser.

Isabella comes across as a strong woman beset by the troubles of a husband whose ear is poisoned by his favourites who have their own agendas. This is a fascinating slice of history to which Carol McGrath does ample justice in this gripping novel.  Historical notes at the end explain the choices the author made. 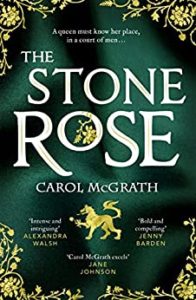 You can BUY the BOOK HERE