The Model Spy by Maryka Baggio 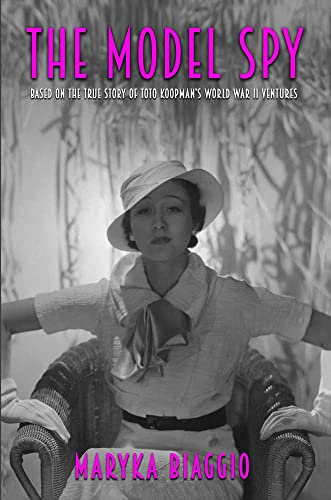 THE MODEL SPY is based on the true story of Toto Koopman, who spied for the Allies and Italian Resistance during World War II. Largely unknown today, Toto was arguably the first woman to spy for the British Intelligence Service. Operating in the hotbed of Mussolini’s Italy, she courted danger every step of the way. As the war entered its final stages, she faced off against the most brutal of forces—Germany’s Intelligence Service, the Abwehr.

PRAISE FOR THE MODEL SPY
“In this impressive biographical novel, Maryka Biaggio presents World War II spy Toto Koopman as he remarkable woman she proved herself to be. Moving and illuminating, this dramatic depiction of an intrepid individual is an admirable blend of fascinating fact and wonderfully conceived fiction.” ~Margaret Porter, author of Beautiful Invention: A Novel of Hedy Lamarr

From the Back Cover

Celebrated model Toto Koopman had beauty, brains, and fame. Born to a Dutch father and Indonesian mother, she took up the life of a bon vivant in 1920s Paris and modeled for Vogue magazine and Coco Chanel. But modeling didn’t satisfy her. Fluent in six languages, she was adventurous and fascinated by world politics.

In London she attracted the attention of Lord Beaverbrook, the William Randolph Hearst of England. She soon became his confidante, companion, and translator, traversing the Continent and finding herself caught in the winds of impending war. Beaverbrook introduced her to influential people, including a director at the British Intelligence Service, who schooled her in espionage.

When Germany invaded Poland, Toto came face to face with reality: either fight the Axis powers or lose the world she loved. She moved to Florence, joined the Italian resistance, and began sending intelligence to London. But Mussolini’s Blackshirts and the Nazi’s military intelligence had her in their crosshairs and, as they pursued her, her courage was tested to the limit.

Maryka Biaggio is an award-winning novelist who specializes in historical fiction based on real people. She enjoys the challenge of starting with actual historical figures and dramatizing their lives– figuring out what motivated them to behave as they did, studying how the cultural and historical context may have influenced them, and recreating some sense of their emotional world through dialogue and action. Doubleday published her debut novel, Parlor Games, in 2013. Eden Waits and The Point of Vanishing were published by Milford House Press (2019, 2021). She lives in Portland, Oregon.