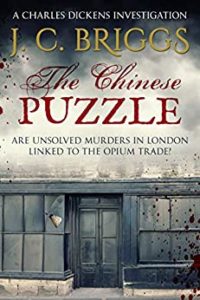 I have enjoyed several of J C Briggs books and I intend to catch up with them all eventually. This one centres around a mysterious Chinese Ambassador who appears at the opening of The Great Exhibition. At first the mystery is about tracing a missing person, a Chinese secretary assumed to be with the Ambassador, but one thing leads to another and it soon turns out another well-connected man has also gone missing. When his body is found in the Thames this leads into a murder investigation. The victim, Cornelius Mornay, a respectable banker, has links to Canton and the Opium trade, and the Opium trade and tea trade are threaded throughout this novel. The plot revolves around the man Mornay’s secret life in China, and the fact that his secrets come home to roost after his death.

Who could fail to enjoy the opulence of the Crystal Palace and the Exhibition, with the carriages and royal attendants — contrasted with opium dens, dark alleys, filth and squalor, and shoe-black boys scrounging a living? What makes this series so enjoyable is the relationship between Charles Dickens and Superintendent Jones of Bow Street. By now they read each others moods and motives pretty well, and obviously have enormous respect for each others’ respective skills. What links them is their quest for decency and to bring murderers to justice, and this makes them characters the reader can warm to. Throughout we have threads from Dickens’ books woven into the narrative, and towards the end we get a glimpse of Dickens the actor, a nice touch, and it leads to a gripping ending.

This was an extensively researched novel, and there are notes at the back to tell you how the inspiration began with a newspaper article, and how the Chinese puzzle of the title might have been an actual object Dickens saw at the exhibition. This symbolic object was used to great effect through the novel.

As always with these books, the characters make it. We see the very rich and the very poor, those we can love and those we can loathe. Most loathsome I think for me was the self-satisfied Vicar Ernest Holiest, and Kitty ‘Puss’ Lovell. As always I love to see Scrap, the boy detective in action, this time felling a villain, and I felt immensely sorry for Kitty’s sister Maggie Chester.

If you love a great murder mystery and to immerse yourself in the sights, sounds and smells of Victorian London, then look no further, J C Briggs evokes the period brilliantly.

BUY THE BOOK US  UK