Today I’m delighted to welcome back Clare Flynn, a writer whose books I have really enjoyed. Here’s a lovely post about her new WWII book, Sisters At War.

Thanks so much for inviting me onto your blog, Deborah. I visited once before to talk about a significant object – then it was a powder compact, inscribed in German. Today it’s a collection of strange pins, a long-handled rake-like instrument and a giant step ladder. The date is 1941 and the place where you’ll find them is a secret bunker under the streets of Liverpool.

When I was a child, I adored watching old black and white war films on TV – the perfect antidote to rainy Sunday afternoons. My favourite scenes were those that took place in secret military command centres where Wrens and WAAFs pushed model planes and boats around giant maps with long pointy sticks like croupiers’ rakes. It was my fantasy job – without the need for a war of course. I was born in Liverpool but had absolutely no idea that one of the most important intelligence nerve centres still lay hidden below the streets of the city. 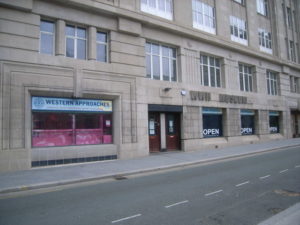 Western Approaches Command was a secret bunker buried under seven feet of concrete, beneath Derby House in the centre of Liverpool, just a few minutes’ walk from the waterfront. Opened in February 1940, it was like catacombs with about a hundred rooms, from sleeping quarters and offices to the nerve centre, The Map Room. The place had around 300 staff – some RAF and Royal Navy officers and a much larger number of women from the WAAFs and Wrens. This was the where the critical Battle of the Atlantic was plotted out. Men and women worked here day and night, from early 1941 until the end of the war, tracking and tracing submarines, enemy aircraft and Allied merchant convoys on the dangerous approaches to Britain from the US and Canada. The craft and the weather systems were attached as little pin symbols to the giant map. Nowadays, when we can track every ship on the planet through an app on our mobile phones, it is hard to imagine that this was done manually during the war without the benefit of satellites or sophisticated communications. 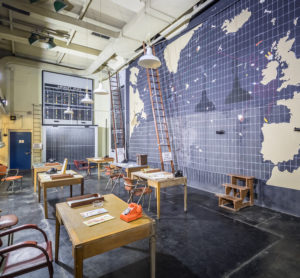 The Derby House bunker was connected to the code breakers at Station X – Bletchley Park –with intelligence passing to and fro, as vital life and death information was pieced together. Keeping Allied shipping safe as it crossed the Atlantic, which was riddled with U-boats, was a hugely challenging task – indeed a near impossible one until cracking the Enigma codes changed things.

The port of Liverpool dealt with most sea cargo coming into the UK and the war effort hung on the ability of those ships to make it across the Atlantic safely. Many didn’t. Proportionately more men lost their lives on merchant ships carrying vital food supplies and raw materials, than died in any of the British armed forces. Churchill, who made frequent visits to Western Approaches, said in his post-war memoirs. ‘The only thing that ever really frightened me during the war was the U-boat peril.’

Operations at Western Approaches continued throughout the Liverpool Blitz, when the city took a pounding, particularly during the month of May 1941. Service people working at Derby House often emerged from its depths at the end of their shifts to scenes of absolute devastation. Here is a panoramic image of the centre of Liverpool taken during the Blitz.

When the war ended, the Western Approaches command centre was locked up and left to the spiders. It remained forgotten until someone suggested opening it to the public. Larger than London’s Cabinet War Rooms, there are radio rooms, telephone exchange, canteen and bunk rooms, the Admiral’s office and a recreated wartime street complete with shops containing typical products. But it’s the Map Room that holds the greatest fascination – with its giant wall map of the Atlantic, its enormous sliding step ladder (perilous while wearing uniform skirts I imagine!) 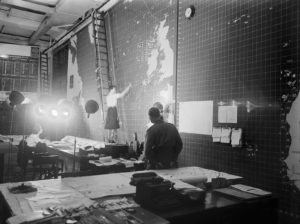 IMAGE OF THE MAP ROOM IN OPERATION DURING WW2

The perils of the Atlantic and the U-boats are all too present for my characters in Sisters at War and the activities of Derby House play a role in the story. Next time I venture up to my birthplace, I will definitely be stopping off to visit the subterranean museum. Meanwhile you can visit it virtually via the museum’s website – and of course in my novel. 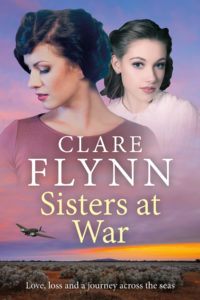 About Sisters At War

The pressures of war threaten to tear apart two sisters traumatised by their father’s murder of their mother.

With her new husband, Will, a merchant seaman, deployed on dangerous Atlantic convoy missions, Hannah needs her younger sister Judith more than ever. But when Mussolini declares war on Britain, Judith’s Italian sweetheart, Paolo is imprisoned as an enemy alien, and Judith’s loyalties are divided.

Each sister wants only to be with the man she loves but, as the war progresses, tensions between them boil over, and they face an impossible decision.

A heart-wrenching page-turner about the everyday bravery of ordinary people during wartime. From heavily blitzed Liverpool to the terrors of the North Atlantic and the scorched plains of Australia, Sisters at War will bring tears to your eyes and joy to your heart. 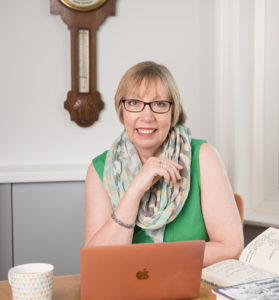 Clare Flynn is the author of thirteen historical novels and a collection of short stories. A former International Marketing Director and strategic management consultant, she is now a full-time writer.

Having lived and worked in London, Paris, Brussels, Milan and Sydney, home is now on the coast, in Sussex, England, where she can watch the sea from her windows. An avid traveler, her books are often set in exotic locations.

Clare is a Fellow of the Royal Society of Arts, a member of The Society of Authors, ALLi, and the Romantic Novelists Association. When not writing, she loves to read, quilt, paint and play the piano.