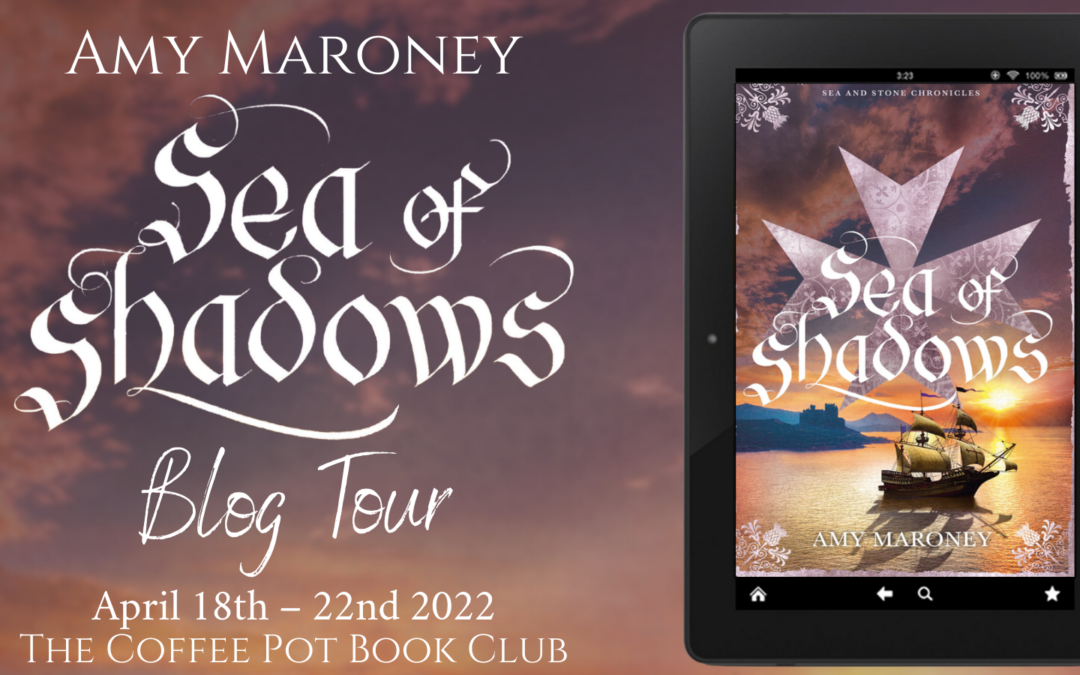 The new novel by Amy Maroney is a stunner. Here is the blurb:

No one on the Greek island of Rhodes suspects Anica is responsible for her Venetian father’s exquisite portraits, least of all her wealthy fiancé. But her father’s vision is failing, and with every passing day it’s more difficult to conceal the truth.

When their secret is discovered by a powerful knight of the Order of St. John, Anica must act quickly to salvage her father’s honor and her own future. Desperate, she enlists the help of a fierce Scottish privateer named Drummond. Together, they craft a daring plan to restore her father’s sight.

There’s only one problem—she never imagined falling in love with her accomplice.

Before their plan can unfold, a shocking scandal involving the knights puts Anica’s entire family at risk. Her only hope is to turn to Drummond once again, defying her parents, her betrothed, even the Grand Master of the Knights himself. But can she survive the consequences?

With this captivating tale of passion, courage, and loyalty, Amy Maroney brings a lost, dazzling world to vivid life.

Sea of Shadows is Book 2 in a series of stand-alone historical novels packed with adventure and romance. 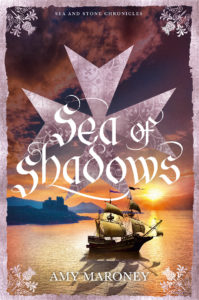 REVIEW OF SEA OF SHADOWS

This is the second book of this series but can absolutely be read as a stand-alone novel. Historical fiction fans will love the carefully evoked detail of the island of Rhodes, and the two main protagonists, Anica Foscolo an artist desperate to learn to paint in oils, and Drummond Fordun a courageous Scottish privateer. Though this is a romance, there is plenty of action, for Rhodes in the middle ages was a hotbed of piracy, slavery and religious tension. It is also a dangerous place, for here a  servant can lose an ear or a hand if  they steal or lie.

As well as the main characters, I really appreciated the fully-rounded secondary characters – Heleni, the flirtatious and selfish sister, Aunt Rhea the forthright business woman, and Troilo Salviati from the grasping Florentine family we love to hate, to mention only a few. I don’t want to spoil the plot, as it contains many surprises for the reader to enjoy.

In the novel we learn about the new technique of oil painting, with its imported linseed oil, as well as the life of a man at sea and the defences of the island from invaders by the Knights from the forts around the island. I highly recommend this novel of action, adventure and romance to anyone seeking a well-written historical novel with an unusual setting. A novel that lives up to its cover and won’t disappoint.

Summer, 1459
Aegean Sea
The rising sun warmed Drummond Fordun’s back and cast a golden glow on the familiar curves of Rhodes. Shifting waters spread out before him, blue-black as a raven’s wing. He stared mesmerized at the waves for a moment, savoring the dance of light and color. Scotland’s sea had never inspired awe in him as the Aegean did. Then again, all this beauty came with a price.

He glanced over his shoulder at the distant shores of Turkey. No swift Turkish fuste were in pursuit, he saw with relief, but that meant nothing. Infidels could be gathering in coastal villages or quiet coves along those shores even now, preparing their sleek vessels to launch an assault on Rhodes tonight.

Overhead, the sails billowed and snapped in the shifting breeze. The wind had been their ally on thevoyage south to Alexandria. The return journey was a different story. A sudden gale had scattered their convoy like errant twigs, cracking one galley’s mainsail mast. The craft trailed the convoy now, a lame sheep struggling to keep up with the flock. Drummond prayed no further harm would come to the damaged ship or its crew.

He strode to the steps leading to the hold. “I see Rhodes!” he bellowed. “Your wives and families await!”

A cheer went up from the rowers on their benches below decks, soon followed by the lilting refrain of a Greek folk song. As usual, his Rhodian oarsmen brightened at the thought of home—and the extra pay Drummond would portion out as soon as they docked. He knew how to keep his men
loyal.

Drummond signaled to his Genoese first mate, a mercenary who’d seen years of action on these seas and was as handy with a crossbow as he was with a compass. “More power from the starboard oarsmen when the harbor walls come into view,” he ordered. “This wind has half a mind to blow us to the Black Sea.”

“As you command, Captain,” the Genoese said in his best approximation of Scots-accented English.

The man put a hand to his chest and bowed slightly. “Grazie.”

Two gulls appeared over the galley and glided on a current of air near the mainsail mast, studying the men with cold yellow eyes.

“We’ve got nothing for you,” the Genoese informed the birds. “If it’s fish you’re after, or biscuit, you’d best look elsewhere.”

It was true. Their hold was nearly empty. Besides ballast, the last soggy rations, and the ever- present barrels of wine and ale, they’d little to show for the journey. But that was as planned. A small wooden box, a letter for the Order’s grand master from the Mamluk Sultanate of Egypt, and several passengers were the only items of value they’d brought back from Africa.

“The lighter the load, the swifter the journey,” Drummond said. “Once we dock, see that the galley is tied up and put to rights. I’ve got to escort the knights to the palace—if we can get through the crowds. With this merchant fleet coming in, the harbor will be jammed.”

“What about our special guest?” the Genoese asked, jerking his head at the figure shrouded in a dun-colored silk cloak who sat under a canvas shade at the stern of the galley. “Is he a man or a statue, I wonder? Every time I glance his way, he’s sitting like a lump of stone.”

Drummond kept his eyes on the island ahead. “He moves. And talks.”

“You speak to him?” The Genoese looked astonished.

“Careful what you say to the man. You know these infidels. Can’t be trusted, no matter how charming they seem.”

Drummond raised an eyebrow. “Who made you the expert on Syrians?”

His crewman shrugged. “Syrians, Turks, Egyptians. They’d slit our throats to a man if given half a  chance.”

“In this case, you’re mistaken. He’s saved more lives than you or I can imagine. And Christian ones at that.”

“How so?” The Genoese seemed genuinely mystified.

A gust of wind flapped the sails, died down, then rose again.

“This wind’s no help, and we’re close enough,” Drummond said, ignoring the question. “Have the crew trim the yards and sails.”

The stone towers standing sentinel over Rhodes harbor came into view as the Genoese turned away, dispensing orders to the crew. A fleet of merchant ships was clustered at the entrance to the commercial harbor, which was already crowded with vessels. Small rowboats ferrying goods from the ships to the quays wove in and out of the bobbing crafts. Two light galleys rowed past the chaos, heading toward the Mandraki, the Order’s military harbor.

Drummond drew in a breath and bellowed, “Let’s skim around this tangle of ships and follow those galleys to the Mandraki.”

The familiar sounds of the harbor descended upon them. Men shouting, the clang of iron on rock from the weapons arsenal under construction nearby, the harsh screams of seabirds circling overhead. Citizens of the city streamed through gates in the massive stone walls, attracted by the
arriving fleet.

As they entered the calm waters of the inner harbor, the tension Drummond had carried in his chest ever since they’d left Alexandria began to ease. For a moment, he allowed himself to imagine the night ahead. Dice, cards, a big meal, a visit to the bathhouse, perhaps a few hours in the city’s finest brothel—or a visit to the lovely Genoese courtesan who kept a private apartment near the marketplace. Then a long, peaceful night of rest in his rented chambers near the Inn of the English. The possibilities swam in his mind, tantalizing him.

Reluctantly, he pushed them aside. The first orders of business were tying up the galley, paying his rowers, transferring three of his passengers to the palace, and delivering a letter to the grand master. Only after all of that would he have an opportunity to relax. “Prepare to dock!” he called as the galley slipped through the water toward the quay. “Let’s show the Order how a landing should be done!”

Buy Links: This novel is available on #KindleUnlimited

Amy Maroney studied English Literature at Boston University and worked for many years as a writer and editor of nonfiction. She lives in Oregon, U.S.A. with her family. When she’s not diving down research rabbit holes, she enjoys hiking, dancing, traveling, and reading. Amy is the author of The Miramonde Series, an award-winning historical fiction trilogy about a Renaissance-era female artist and the modern-day scholar on her trail. Her new historical suspense/romance series, Sea and Stone Chronicles, is set in medieval Rhodes and Cyprus. Website: https://www.amymaroney.com/