Murder at Beaulieu Abbey by Cassandra Clark is out today! #MurderMystery

From Cassandra: I am now writing the Abbess of Meaux series of historical mystery novels set in fourteenth century Europe. I’m pleased to be able to draw on travels in France and Tuscany and bring together my interests in music, politics and history.

The first in the Abbess of Meaux series was published in 2008. Followed by The Red Velvet Turnshoe a year later when Hildegard crossed the Alps. She was back home in York for The Law of angels and the following year off down to Westminster with Alexander Neville’s cavalcade to see King Richard open parliament. Meanwhile she fell for a London bad boy involved in the spying game for which she had to go on a penitential pilgrimage to Santiago de Compostela.

Back in Yorkshire she stays at the sinister priory in Handale Woods – a horrific dragon and the mutilated body of a young mason are a mystery that puts Hildegard’s life in jeopardy once again.

Next, with dark forces building around King Richard, the Prioress has a special assignment for Hildegard. She must go to the pope’s palace at Avignon in the south of France to find out whether he will give his support to the King or to his ambitious and deadly uncle, the duke of Gloucester … But the pope himself has a terrifying secret and Hildegard is the only one who can put all the pieces of the puzzle into place.

Click here to read an interview with Cassandra Clark at bfkbooks.com

Now follow Hildegard of Meaux into the dark side of medieval England in book 11 when a request to escort a young heiress to the north becomes a sinister game of cat and mouse. 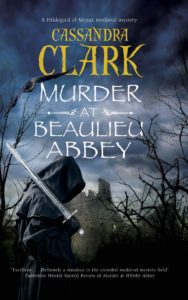 Death and danger await intrepid nun Hildegard of Meaux when she undertakes a secret mission for the good of her Order, in this eleventh action-packed installment of the medieval mystery series.

February, 1390. The Church seethes with rebellion. Newly elected Pope Boniface faces a challenger: the anti-pope Clement, who sows discord from his power base in France.

The quarrel threatens the very survival of the Cistercian Order. So when suspicions grow that distant Beaulieu Abbey may turn traitor, Hildegard’s prioress summons her with a mission she can’t refuse: travel to the isolated royal abbey and spy out their true allegiance.

The public reason for Hildegard’s trip is more prosaic. A young Cornish heiress, promised in marriage to the son of local aristocrat Sir William, needs escorting to her new home. It’s not often Hildegard joins a betrothal party, and she’s looking forward to meeting the girl.

But little does Hildegard know, death and danger wait at Beaulieu – and even the protection of her travelling companions, the monks militant Brother Gregory and Brother Egbert, may not be enough to keep her safe from harm . . .

Buy MURDER AT BEAULIEU ABBEY on Amazon US 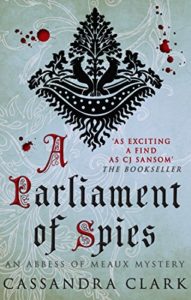 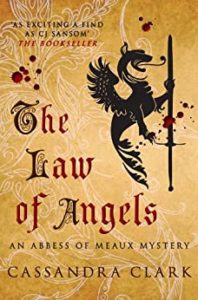