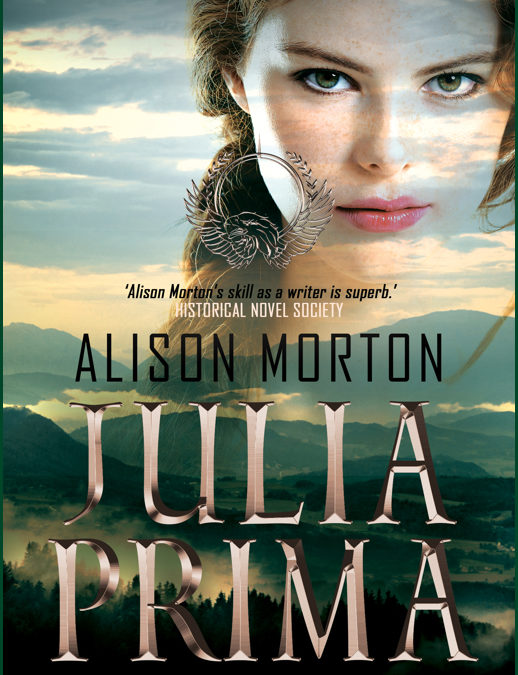 AD 370, Roman frontier province of Noricum. Neither wholly married nor wholly divorced, Julia Bacausa is trapped in the power struggle between the Christian church and her pagan ruler father.

Tribune Lucius Apulius’s career is blighted by his determination to stay faithful to the Roman gods in a Christian empire. Stripped of his command in Britannia, he’s demoted to the backwater of Noricum – and encounters Julia.

Unwittingly, he takes her for a whore. When confronted by who she is, he is overcome with remorse and fear. Despite this disaster, Julia and Lucius are drawn to one another by an irresistible attraction.

But their intensifying bond is broken when Lucius is banished to Rome. Distraught, Julia gambles everything to join him. But a vengeful presence from the past overshadows her perilous journey. Following her heart’s desire brings danger she could never have envisaged…

What a rollercoaster. I’ve been meaning to get to this series for ages, and worried that I would need to know something of the other books – but no, this book stands perfectly alone and will have you eagerly flipping the pages to find out what happens next. In Noricum, Roma Nova, its 370 AD and royal daughter Julia Bacausa lives a relaxed life with her father, who was once an elite fighter. One day at the market she is caught by surprise by her intense feelings for a Roman soldier. (Julia has been divorced by her own Pagan laws, but her Christian husband Deodatus still refuses to divorce her.) After this hot and passionate encounter she doesn’t expect to see the Roman again, but wouldn’t you know it, when the Roman commander visits, the same Roman turns up again as part of a delegation to her father. His name is Lucius Apulius, he is the commander’s Tribune, and his arrival in Julia’s life certainly brings complications. At the outset I expected Apulius to be the obvious alpha male, but through the story he turns out to be much more than that. Julia herself is bold and courageous, and unafraid to tackle anything in her way.

The novel is written in crisp vivid prose which really evokes the sights, sounds and smells of this alternative Rome. It is hard to believe the story is a fabrication because the Roman history has been so well welded to the narrative. This is a fast moving adventure with characters to believe in, plenty of travel, a fair bit of violence, and a hot and passionate romance.

I can see why this series has been highly praised and I heartily recommend Julia Prima to all who enjoy a thriller with a strong woman at its heart.