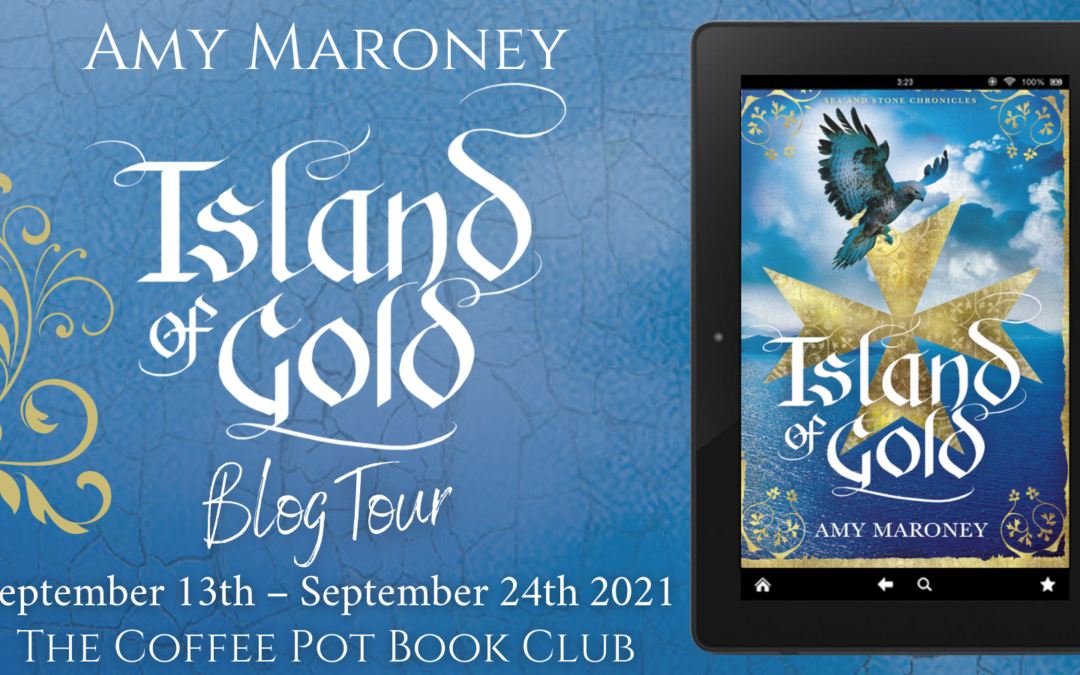 When Cédric is recruited by the Knights Hospitaller to the Greek island of Rhodes, his wife Sophie jumps at the chance to improve their fortunes. After a harrowing journey to Rhodes, Cédric plunges into the world of the knights—while Sophie is tempted by the endless riches that flow into the bustling harbor. But their dazzling new home has a dark side.

Slaves toil endlessly to fortify the city walls, and rumors of a coming attack by the Ottoman Turks swirl in the streets. Desperate to gain favor with the knights and secure his position, Cédric navigates a treacherous world of shadowy alliances. Meanwhile, Sophie secretly engineers a bold plan to keep their children safe. As the trust between them frays, enemies close in—and when disaster strikes the island, the dangers of their new world become terrifyingly real.

With this richly-told story of adventure, treachery, and the redeeming power of love, Amy Maroney brings a mesmerizing and forgotten world to vivid life. 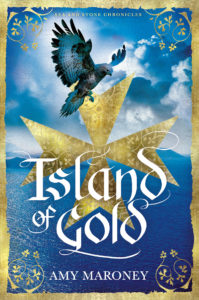 This is a beautifully written novel set in 15th Century France and on the island of Rhodes, during the time when Turkey And Greece were battling over territory. Initially this is a romance, between Cedric, a young nobleman and falconer, and Sophie the daughter of a rich merchant, but a commoner. The romance is tenderly drawn and we get wonderful portraits of both lead characters – of their hopes and desires for the future, and of the way their different upbringings have affected their lives. Cedric is a man who can handle himself in battles against bandits or ecorcheurs, he is used to travelling, being on the road and his freedom. Sophie on the other hand has been brought up by a doting father to be spoilt and to enjoy the luxuries of a wealthy household. Naturally their eventual marriage runs into many difficulties, none more so than when they take ship for Rhodes.

From here, the novel becomes more of an adventure, and we begin to learn more about the Knights Hospitaller of St John who were fighting to maintain a stronghold against Muslim forces. Not only this, but the traffic of slaves, and piracy and corruption bedevil the island. In defending a woman, Cedric kills an enemy, thus rousing the ire of his supporters. Cedric has to deal with the treachery of men he trusted, and all the time a deadly plague is raging. There is a lot going on, all set against the mythic background of the old Greek religion and the newer Catholicism and Islam, in a battle for supremacy.

This is a novel rich in detail, from how to train and raise gyrfalcons, to making certain sorts of dye, to the use of ‘dragon’s blood’ in medicine, to the running of the Grand Order of the Knights. As a reader I love to be immersed in a different time and place, especially one that is unfamiliar. This is a fantastic novel with something for everyone, and I’m sure it will prove very popular with historical fiction fans, even if they have no knowledge whatsoever of the period. Once you’ve started it, you won’t want to put it down, and it comes highly recommended from this picky reader.

Amy Maroney lives in the Pacific Northwest with her family, and spent many years as a writer and editor of nonfiction before turning her hand to historical fiction. When she’s not diving down research rabbit holes, she enjoys hiking, dancing, traveling, and reading. Amy is the author of the Miramonde Series, a trilogy about a Renaissance-era female artist and the modern-day scholar on her trail.