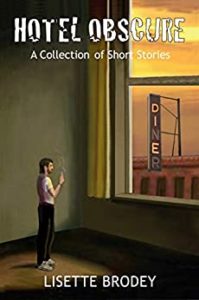 Every now and then I feel like reading something different . Hotel Obscure is about as far away as you can get from my current life as a comfortably-off, middle aged (if not old!) woman in a small  quiet village in Northern England. Hotel Obscure of the title is an American hotel populated by the dispossessed, by hookers, drug dealers, failed rock stars and general low-life. It’s the sort of place people go to hide, or to die, and in this collection the characters do both!

The stories in the book are linked by the place in one way or another and some of the stories intersect in surprising ways. What I really enjoyed about these stories were the characters, who never failed to engage the reader with their hardships and stories of the wrong side of the tracks.. Each story often had a sting in the tail – I particularly enjoyed ‘Requiescat in Pace’ which had a marvellous twist at the end, ‘Not that Lonely’ was a great slice of life showing how connected even the most dysfunctional people are, and dealing with death in a really matter of fact way. Many of the stories have the threat of death lurking beneath like a thread. I loved the ageing Gloria in her overly colourful clothing and Margaret in her ‘fire-engine red’ stilettos and Johnny and Henry and their uneasy comradeship based on proximity of place rather than common interest. Toleration of others is a heart-warming strength of these characters.

Lisette Brodey has a way of getting under people’s skin and noticing how they think and what makes them unique. In the last story, Ellmore J Badget Jr is so repressed and strait-laced that he finds even the thought of adjusting his tie, once his day has started, makes him queasy. Nevertheless I warmed to him and was rooting for this son of a judge who was always a disappointment to his father. Being a disappointment is a theme that recurs in many of the stories, the sense of just having missed the destiny of greatness, or of feeling that you cease to matter to the world. What becomes apparent from the story is that everyone does. The stories are poignant and gripping and I highly recommend Hotel Obscure.

Buy the book US

Reader Note: contains expletives and sexual references in keeping with the subject matter