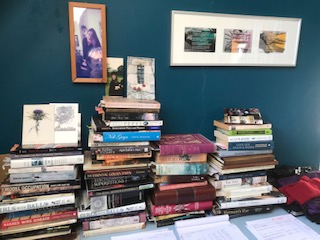 I’ve just started a new book and after quite a bit of research, this is the first week of actually typing anything for my new project, book two of a series set in Italy. I’m a pantser, so I just launch straight in and then try to write my first draft as quickly as possible, and allow a lot of time afterwards for editing, refining and re-structuring the story. I have an overarching view of the story in the form of two sheets of A4 paper which are my only outline, plus of course the memory of what happened in Book 1. So far this week I’ve managed just over 7000 words, which is average for me. It gets slower as the story develops in complexity and as I figure out where the characters are taking me and what new research I need to do.

The piles of books on my desk (above)represent the things I am working on. On the left – things I’d like to write about – the writing wish-list. In the middle, books about my last series (in case anyone asks me awkward research questions!) and the next two piles are books about the stories I’m working on right now. There’s a lot about poisons as my main protagonist is a poisoner.

Again, the second book in my ‘Italian’ series is about a commoner. Publishers are often keen that novelists should write about ‘marquee names’ – which means to say people they’ve heard of. They know they can sell any number of books about Anne Boleyn. If the book is about someone people have heard of, its much easier to sell.

This is not actually true. The Girl with the Pearl Earring sold well, despite having an unknown woman at its heart. As did The Miniaturist. Besides,  Royal courts have never much interested me. Instead I’m interested in individuals who have made their mark in history despite being supposedly ‘nobody special.’ My job as a novelist is to make them special and unforgettable. This is a joy, as unlike Anne Boleyn, where there are thousands of interpretations of her life, each of my characters can shine out from her historical past like a gem in a very direct way.

The three women I wrote about from Pepys’ Diary were women he mentioned in passing. Yet now I have re-imagined rich and vibrant lives for Deb Willet, Bess Bagwell and Mary Elizabeth Knepp. You won’t know who they are because they are footnotes in history. The only portrait of them that exists, is in Pepys’ Diary and my books, and so to me these characters are unsullied by other interpretations. I got to know them through my own internal imagination and Pepys’ direct descriptions rather than through some other biographer’s lens. These women now live as more than footnotes and have been given imaginary voices, and I hope voices that concord with their status in the period. 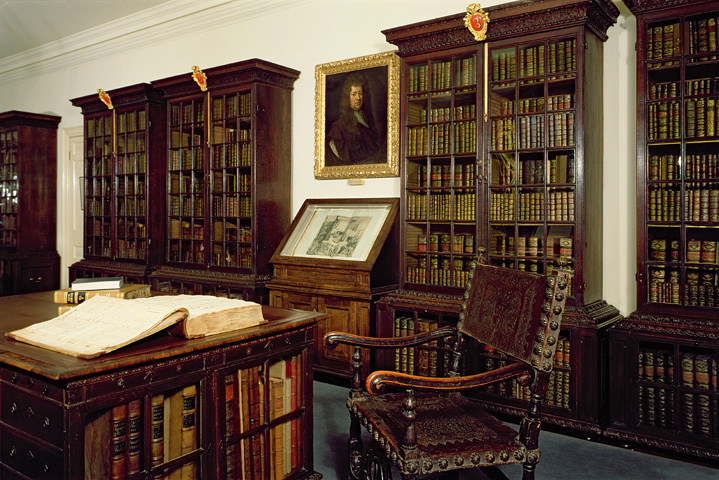 Because of the fact my characters have no biographers, my research is mostly background. I read very few books that pertain directly to my main characters. I love old maps and take great care with the settings to make them as authentic as possible. Here’s one of old Palermo I used in Book I of my new series. Historical events, and their impact on the people in my stories are my main interest. The cities of Palermo and Naples at that period were subject to earthquakes, rebellions and the eruptions of Mount Vesuvius. Politics always looks very different from the bottom, rather than from the point of view of those who make the decisions at the top.

My new series is based around the life of Giulia Tofana, an Italian 17th Century poisoner. She allegedly killed 600 men in the cities of Rome and Naples. She is half legend, half real person. Her story has been embroidered and changed over the centuries, but no-one has written a biography of her. So I had to find an internal way to bring her to life, and one of the ways I attempt to do that is to give her a strong setting, and within that to furnish her with a strong set of opinions. For her poisonings to be convincing, her view of the world has to be skewed in some way by her life’s events. In the first book we see these events brought to life, but by book 2 she is now in a very different situation. From being a courtesan in the first book, she now finds herself a nun in charge of a family of young women incarcerated against their will. 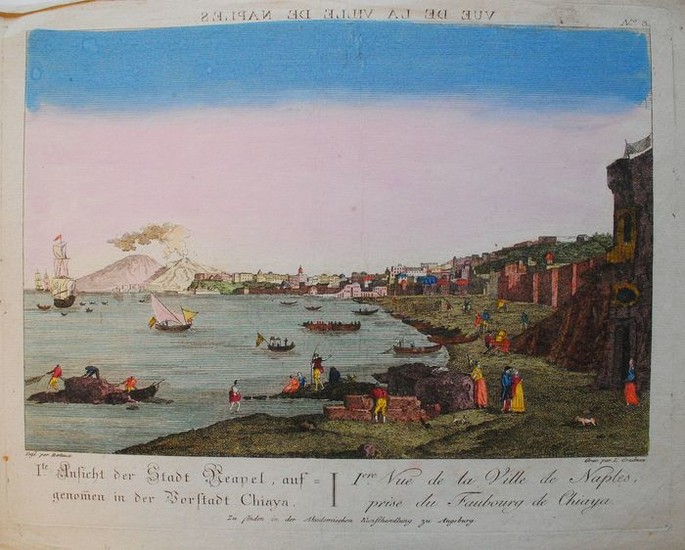 The first novel in the series, ‘The Poison Keeper’, is finished and has been contracted to Sapere Books for publication early in 2021. In my first week writing Book 2, I’m wrestling with how much backstory a new reader needs to jump them into the story. I’m also researching the history of the silkworm which will play a big part in the unfolding events. And as always I’m enjoying breathing life into Giulia Tofana, a woman who has not yet been voiced in an English-speaking novel.

Thank you for reading. Comments welcome.

My new WW2 novel will be published soon, and my latest book is here