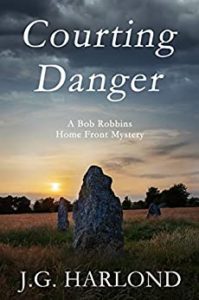 I’ve read both the other books in this series so was really looking forward to this third book. And its an absolute cracker. When the local doctor is found semi-submerged in a pond associated with the Old Gods – Gogmagog Ditch,  Bob Robbins and his sidekick Laurie Oliver are brought in to investigate. Initially labelled as a suicide, the doctor’s death is soon discovered to be the result of bludgeoning about the head and so the sleuthing begins. There’s a large cast of interesting characters, and it soon turns out the doctor is not as clean-living as we might expect and a veritable Lothario, and several of his women friends are possible suspects.

I enjoyed taking a trIp to the standing stones and old caves of Cornwall, to Willoughby’s antiquarian bookshop (which I have to admit I could probably have happily lingered in for a few hours in real life), to the racing stables staffed with the cold fiancee Daphne and sunny Pippa. There are some wonderful eccentrics, including the Hilda, the manipulative and bullying sister of Gwen, an invalid, and Muriel Kittoe the author of murder mysteries.

Bob Robbins is a great character to get to know, and I enjoy the way he still talks to his now deceased wife, Joan, which is both poignant and realistic. Laurie Oliver, the younger policeman, who knows all sorts about literature and is apt to quote it to the consternation of his boss, is delightful, and keeps Bob on his toes. Add to the interesting characters a plot involving drugs, old rituals, stolen goods, army manoeuvres and an attempt to send someone crazy, and you have all the ingredients you need for great entertainment and a great read.

You can buy the book here US  UK

Read my Review of Private Lives