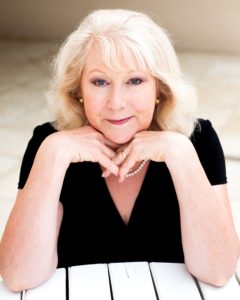 I’m thrilled to welcome Charlotte Betts to my blog today to tell us about the history that features in her new novel, The Fading of The Light. I’ve read it, so can really recommend it as an exciting summer read.

Charlotte is a winner of the Romantic Novelists Association Award for Historical Fiction, and this trilogy of books about the artists community in Cornwall is full of fascinating characters and lush settings.

Charlotte lives on the Hampshire/Berkshire borders in a C17th cottage in the woods. A daydreamer and a bookworm, she enjoyed careers in fashion, interior design and property before discovering her passion for writing historical novels.

Below Stairs by Charlotte Betts 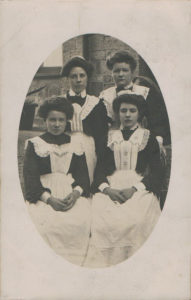 In 1901, the census shows that over 40% of the adult female population worked in service and this didn’t include the large number of girls, some barely ten years old. Working conditions were unregulated and a maid would often work a seventeen hour day with only one afternoon off a week and time for church on Sunday mornings. There was no legislation that protected a servant in old age or in times of sickness until the National Insurance Act of 1911 was passed.

There was a stark contrast between the family’s opulent rooms and the meagre servants’ quarters. This was deliberate so that a servant didn’t get ‘ideas above his, or her, station.’ Despite low wages and, often poor conditions such as lack of sanitary arrangements, competition for places was fierce. Working as a servant was sometimes the only alternative to near starvation, providing regular meals and a roof over their head. In large country houses and London townhouses, male and female servants were separated to prevent them fraternising. 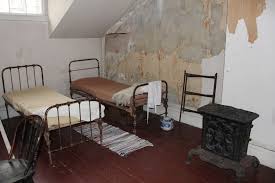 Maids were crammed into attic bedrooms, while the men were usually housed in the basement or rooms near the kitchen. If a pretty maid, however, attracted her master’s eye she had little say in the matter and would immediately be sent packing without a reference if she became pregnant. 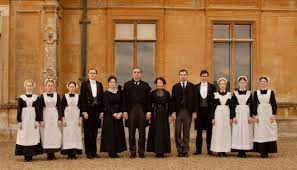 In the great houses, aristocratic employers had an army of mostly hidden servants to attend to their every need. The Duke of Devonshire once stated that a staff of two hundred were required to manage a house party of fifty guests. The number of servants employed by a family indicated their wealth and social status 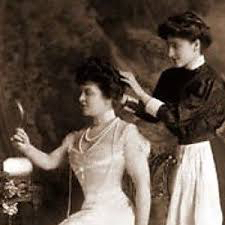 There was a strict hierarchy for the staff of a prosperous family. The butler oversaw the entire household. Beneath him were several footmen, a gentleman’s valet, a lady’s maid and gardeners. A housekeeper, reporting to the butler, would have beneath her in the hierarchy a cook, kitchen maid, scullery maid, parlour maids, chamber maids, a nanny and a nursery maid for the children. 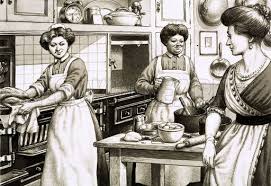 Even middle class families would have several servants, at least a cook-housekeeper, a maid or two and perhaps a gardener. A charwoman might come once a week to do ‘the rough’ and laundry might be sent out to a washerwoman. The cook would attend the mistress of the house in the mornings to decide upon the menus. 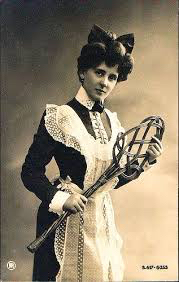 Servants adhered to a strict routine, often beginning their work at five-thirty am. There were few labour saving devices and plenty of elbow grease was required in the constant battle against dirt and dust from the coal fires. Carpets were brushed twice a week and rooms dusted and beds stripped daily. Endless buckets of water were carried upstairs and then the slops and night soil had to be carried downstairs. Maids must have been delighted when bathrooms were installed in their employer’s houses. After cooking and serving the family’s sumptuous meals in the dining room, the servants ate the leftovers in the kitchen. Their evening meal would be served at about 9pm, after the family had eaten, but work wasn’t finished until the family had gone to bed, the butler had locked up and the junior housemaid had taken hot water bottles upstairs, She was then free to return to her unheated attic to fall, exhausted, into bed.

After the 1870s, education became more available to the masses and literacy increased, bringing with it changing social attitudes and expectations. Young girls became reluctant to enter the endless drudgery of service if there was work available in shops, factories and even offices. During the Great War, many women left service to fill the jobs left vacant by men, even though their pay for the same job was far less than a man’s salary.

Of course, once the war was over, the surviving men wanted their jobs back, forcing many women back into service as their only option. Nevertheless, women had grasped the opportunity to show what they were capable of and this ultimately led to them being allowed to vote, though it wasn’t until after 1928 that all female servants were granted this privilege. Meanwhile there were still floors to be scrubbed and grates to be cleaned and the master’s boot laces to be ironed. 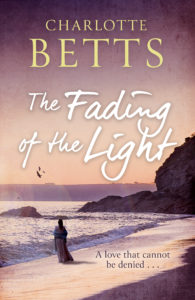 To be the first to hear about Charlotte’s new releases and her writing life, please do visit her at www.charlottebetts.co.uk