Audiences Behaving Badly – The London Theatre in the 1660’s 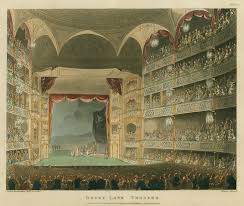 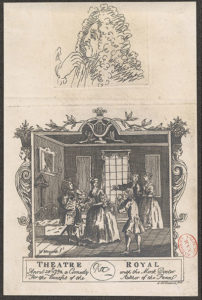 In my novel, Entertaining Mr Pepys, the main character ‘Bird’ Knepp, so named for her beautiful singing voice, is an actress with the King’s Playhouse in the city of London, just before the Great Fire. As an actress her job was to please the audience – but the audience of the time was not nearly so well-behaved as it is now, and what’s more it was much larger than today; “by 2 a-clock, there was 1000 people put back that could not have room in the pit,” wrote Pepys. (Diary, 6 February, 1668.)

In the theatre there were three places to sit – first, the pit, closest to the stage, well-lit, but rough and ready. “The Pit is an Amphitheatre, fill’d with Benches without Backboards, and adorn’d and cover’d with green Cloth. . . “ Henri Misson, visitor to London in the 1690s.

Fights in The Pit

The audience in the pit included ‘prentices’ (young men apprenticed in trade) but also “Men of Quality, particularly the younger sort, Some Ladies of Reputation and Vertue, and abundance of Damsels that hunt for Prey …” (Henri Misson) All these were crushed together, and wealthy patrons avoided it if they could. Tensions often ran high in this confined space.

In a letter to a relation John Verney tells us of a fight in the pit, “On Saturday last, at the Duke’s Playhouse, Sir Thomas Armstrong killed Mr Scrope….their quarrel is said to be about Mrs Uphill, the player”. Apparently this was a row over a woman, but a circle was formed around them, and the two men fought to the death right in front of the assembled audience. I don’t suppose the actual play held many surprises after that!

The Box – a stage in itself

The alternative was a box, above the stage and more expensive. From the box you could both see the play and be seen. A box was a sign of higher status because of its expense, and because you were higher than, and immediately visible to, those in the pit. The first time Samuel Pepys paid for a box, he says;

“And this pleasure I had, that from this place the scenes do appear very fine indeed and much better than in the pit.”

The boxes were also miniature stages in themselves, where audiences could gawp at the sexual politics of the day. At the play The Jovial Crew, Pepys witnessed the onset of the King’s rampant affair with Barbara Palmer, Lady Castlemaine. The King’s mistress, always flamboyantly dressed, often appeared at the theatre bedecked in jewels that the impoverished populace had paid for with their taxes. 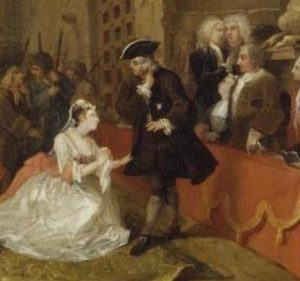 Those in the boxes often performed from there, making welcome – or unwelcome – observations on the play. Sir Charles Sedley and his female companion did just that, and Pepys tells us ‘He was mighty witty … But by that means I lost the pleasure of the play wholly, to which now and then Sir Charles Sedley’s exceptions against both words and pronouncing was very pretty.’

The Gallery – Beware of Spit

The middle ground was the gallery, which cost 12 pence as opposed to five shillings for a box. There you were in danger of being spat on, “And here, I sitting behind in a dark place, a lady spat backward upon me by a mistake, not seeing me. But after seeing her to be a very pretty lady, I was not troubled at it at all.” (Pepys 28 January, 1661.)

Even in the gallery though, disturbances could wreck a performance. The Custom of the Country was apparently ‘so damned bawdy that the ladies flung their pears and fruits at the actors.’  Women’s vocal outrage against the male-orientated, rakish comedies is said to have ruined many a play.

In the prologues of many plays of this period, which are meant to address the audience directly,  we read of ‘fop alley’, ‘wits’ corner’, ‘punks’ boxes’ and ‘bullies’ benches’.  All these point to a lively dialogue between actor and badly-behaved audience, and one I would love to have witnessed. 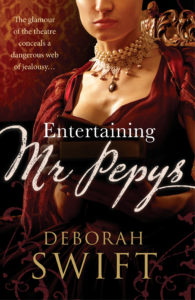 Follow Deborah on Bookbub for all her bargain books.