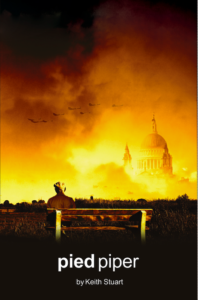 I’m delighted to welcome Keith Stuart to my blog today to tell me about his new book, Pied Piper.

In September 1939 the British Government launched Operation Pied Piper. To protect them from the perils of German bombing raids, in three days millions of city children were evacuated – separated from their parents.

This story tells of two families: one whose children leave London and the other which takes them in. We share the ups and downs of their lives, their dramas and tragedies, their stoicism and their optimism. But. unlike many other stories and images about this time, this one unfolds mainly through the eyes of Tom, the father whose children set off, to who knew where, with just a small case and gas mask to see them on their way.

Tell me about why you chose to write about WW2 and why this particular history?

I was born in 1952, just six years after the end of a second world war, three years after the end of war-time rationing and eleven years before conscription ended. !945 saw the end of a period of almost thirty years of conflict (albeit with a few years break), which had seen millions killed and atrocities on a scale the like which one can hardly comprehend. But it began a lifetime, for my generation, of relative peace and a period of change perhaps faster and more significant than many periods before or since.

This is a period of history which fascinates me.

The kernel for this first novel came from nothing more than a five minute ‘warm-up’ exercise one Monday morning at my writing class. We were asked to take ourselves, as it were, in a time machine, backwards or forwards. Without needing to think I went back to 1939 and the evacuation, to a story I feel has most often been told from the point of view of the mothers or the children themselves. What must it have been like for the fathers? Though many men had volunteered, conscription didn’t start until October 1940 – a year after the evacuation – and yet images of the times don’t show many men waving their children goodbye. I felt there was a story there, one which fitted with an interest I have in mental health and the changing definition of masculinity. An historical setting, the moving story of hundreds of thousands of children leaving their parents, and some fascinating, contemporary issues started to come together. And so, this first novel evolved.

What fact or feature about the evacuation did you find the most surprising or interesting?

When I researched to find exactly what parents were told, I found the words of the leaflets that were posted through letterboxes. It simply said that parents should deliver their children to the station from where they would set off to ‘somewhere’. It explained that parents would be told at some point where their children were, once they were settled. I struggle to comprehend what that must have felt like, to pack little children off with a case and a gas mask, with no knowledge of where they were going or who they were going to live with. For mothers it must have been heartbreaking but neither then nor now would anyone feel uncomfortable at the sight of a weeping, distraught mother. But how were fathers supposed to react at a time when men kept their emotions very much to themselves?

Interestingly, and I had not been aware of this previously, many of the children returned to the cities before the bombing raids began. Operation Pied Piper took place in September 1939 but the first bomb did not land on London until almost a year later.

What gave you the impetus to write your first novel?

In truth the impetus came from a few things aligning. I had always thought I had a novel in me – but who doesn’t – and retirement afforded me the time seriously to consider writing one. I had found it less easy to adjust to retirement than I had anticipated and joining a writing class filled some time. It gave me opportunities to write for the sake of it rather than as I had mainly done before, because I was required to for some purpose or another, and some positive feedback made me feel that perhaps I could string a sentence together. In fact, I knew I could do that, but it was encouraging to hear that some of those sentences touched others. I had no excuse and I came to realise I really wanted to write that novel.

In the process of writing this book, what craft aspects mattered to you the most as a novelist?

I was keen to capture the deep feelings of a man. I wanted to draw an ordinary man, dealing with extraordinary circumstances and get right inside him. I decided to write alternate chapters in the first and the third person. The chapters which featured the main character are written in the first person: the world, the events and their impact are seen from his viewpoint. It allowed me to get inside his head and take the reader there. I wanted the reader to empathise and sympathise with him, to share his love, anxiety, grief and determination.

The ‘other’ chapters written in the third person allowed me to sweep across several characters and create a contrast between the closeness I wanted with Tom and the slightly more distant relationship with the rest of the cast. Because the technique is consistent I didn’t need chapter headings to remind the reader of who they were getting the story from: early on in every chapter, just in case the reader hadn’t got the rhythm either ‘I’ or a name would act as a reminder.

What have you learned writing this novel that will help you writing the next?

I’ve learned that I enjoyed allowing the story to unfold and develop organically but that working like that is inherently risky. I wrote myself into a quite long-lasting cul de sac: I had to abandon ship or work it out and, I hope fortunately, I worked it out with a bit of research and some encouragement that what I had already had was worth concluding.

I learned that, no matter how many times you go over and over what you’ve written you might make the same mistakes you spot in other writers. It irritates me intensely when writers have their characters ‘ball their fists’ or ‘gun the engine’ over and over again. Hey ho, I found mine after it had gone to print but I’m not going to tell you what it is!

Have you another project (writing or non-writing related) that you are working on that you can share with us?

I am toying with the idea of taking my characters, as they are at the end of Pied Piper and casting them forward about ten years, to the end of the war, maybe to when I was born. It might be interesting to explore how the was has affected them all and how their lives shape up as they enter the post-war recovery and the social, musical, political explosions of 50s.

Keith Stuart (Wadsworth) taught English for 36 years in Hertfordshire schools, the county in which he was born and has lived most of his life. Married with two sons, sport, music and, especially when he retired after sixteen years as a headteacher, travel, have been his passions. Apart from his own reading, reading and guiding students in their writing; composing assemblies; writing reports, discussion and analysis papers, left him with a declared intention to write a book. Pied Piper is ‘it’.  Starting life as a warm-up exercise at the Creative Writing Class he joined in Letchworth, it grew into this debut novel. 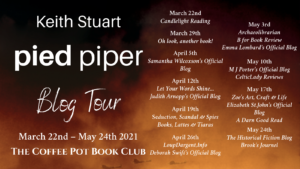 BUY THE BOOK, or read free on KINDLEUNLIMITED