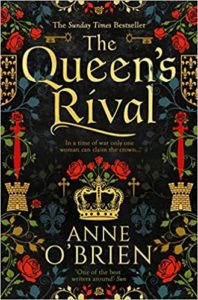 More about best-selling author Anne O’Brien can be found on her website, or chat to her on Twitter

One family united by blood. Torn apart by war…

The Wars of the Roses storm through the country, and Cecily Neville, Duchess of York, plots to topple the weak-minded King Henry VI from the throne.

But when the Yorkists are defeated at the battle of Ludford Bridge, Cecily’s family flee and abandon her to face a marauding Lancastrian army on her own.

Stripped of her lands and imprisoned in Tonbridge Castle, the Duchess begins to spin a web of deceit. One that will eventually lead to treason, to the fall of King Henry VI, and to her eldest son being crowned King Edward IV.

Hail Mary, full of Grace, Our Lord is with thee.

My faith is compromised. I kneel at your feet with the petition of any mother. Once again I fear for my son’s life, this time on some blood-drenched battlefield of the north.

Forgive the sad repetition of my prayers. You know the cruelty of men when they sent your son to his death. Protect Edward. Grant him victory. I am sleepless with despair.

Once again I watched my closest family ride out from London, bright with banners and confidence in their cause, whilst I was forced to accept that I might never see them again.

I cannot weep. My tears are frozen in fear.

Forgive my untruths, if such they were, in keeping the flame of Richard’s courage and leadership alive for his young son. I am certain it was the Neville betrayal that brought him to his death. That is what Diccon must believe. My lord Richard’s honour must be upheld for his sons, and I will do it.

It is said that York and Lancaster will face each other once again on a battlefield.

Is there no end to it?

Have we not suffered enough? It is said that the conflict will be at Towton, a village outside York that no one has ever heard of. If it occurs on Palm Sunday, when Christ rode into Jerusalem, what a terrible day that will be for both sides. The weather is not fit for battle. The Queen and her son, and Henry of Lancaster whom we may no longer call King, have taken refuge in York to await news. Here at Baynard’s Castle our Duchess Cecily will, hourly, be demanding couriers with news from her son Edward, the new but as yet uncrowned King.

Were you aware? Edward of York, soon to be crowned King if he returns with a victory in his hands, has instructed the illustrious Mayor and Aldermen of the City of London that in his absence it is his Lady Mother who is named by him as his representative? It is the Duchess who presides over our new king’s household. We swear she will do it with superb efficiency.

Such power for the lady who never wore the crown.

When will battle be? Who will come away with victory? White rose or red?

We wager it will be white. But who’s to know? We have been wrong before.

The Bishop of Elphin to Bishop Francesco Coppini of Terni, one-time Papal Legate

An event of some moment that may be to your advantage.

We had just heard Vespers. The Duchess has been fraught all day, and our spirits were low with lack of news from the north, although the Duchess’s demeanour was as always exemplary. She has marvellous self-control, even when racked with fear. Except when she dropped her Missal during the raising of the Host.

And then, after Vespers, her control deserted her completely.

The Lord Treasurer, waiting for us in the Great Hall, carried a letter to our blessed Duchess of York. She read the letter. Her face paled. Her hand trembled as she passed the misused Missal to me, her other hand clenched like a claw around the document. It had taken her naught but a moment to read the news, fair or foul. Her face was as white as the snow falling outside the window. Or as colourless as a death-mask. I might have thought there were tears on her cheeks, if I did not know her better.

I feared the worst and took her arm, offering my assistance in what I considered to be her overwhelming grief. She clung, fingers digging into my sleeve, but only for a fraction of time, before she turned on her heel, climbed the staircase to re-enter her chapel, beckoning for me and her two chaplains to follow. There she fell to her knees before the image of the Blessed Virgin and buried her face in her hands.

I did not know whether I should begin a Requiem Mass or start to sing a Te Deum, so silently distressed was the Duchess.

You will know the answer by now, I expect.

I imagine that you are praying hard for a Yorkist victory. The family is close to your heart and you will have your eye on the papal legate’s promotion again. You should also pray that your enemies (Queen Marguerite and France) do not speak out against you.

The Battle of Towton was fought on Easter Eve.

The longest and bloodiest battle on English soil, the conflict bitter and vicious, repaying old scores.

Fought through a snow-storm, impossible to see friend from foe. The snow and Cock Brook ran red with blood.

How many lost? Hundreds. Nay, thousands. Enough to need mass graves where all were tumbled.

Who claimed the victory?

The House of York.

Written from the Palace of Westminster

Do I mourn or do I rejoice?

I fear that Cecily will become unbearable in her pride for the achievements of her son. As if in imitation of the brave and noble heroes of old who fill my books, Ned has asserted his hold on England’s crown on the battlefield of Towton.

Cecily already acts the role of Dowager Queen. She has set about making preparations for the coronation. I wish you would come and give me strength to support it.

A Queen does not need to be crowned in order to rule, Cecily says if I dare to take her to task for her peremptory commands throughout her household.

I am pleased for her, of course, but I cannot help but remember my husband and son, dead on battlefields or in the aftermath. Nor can Cecily be cold to the onslaught of death on both sides. We have lost nephews in the terrible carnage at Towton. Lord John Neville and Henry Percy, Earl of Northumberland, add to the number of our family dead.

I feel wrung out with mourning.

Perhaps the outward jollity of a coronation will do us all some good!

Cecily, Dowager Duchess of York, to Edward, Duke of York, King in Waiting

To my well-beloved son,

This is why I write to you.

I would commission you with a task before you leave the north.

Have the heads, those terrible mementoes of Wakefield, removed from Micklegate Bar. Have them carried to Pontefract to be reunited with those we love. It would be a double humili­ation to leave them longer for public view and despoliation from time and weather.

You will be feted in York, of that I am certain. It is your task to tighten the bonds of friendship with this important northern base.

I will ensure that all is prepared for your return to London. 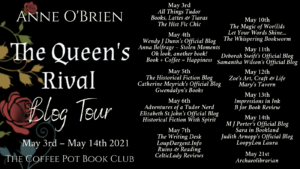