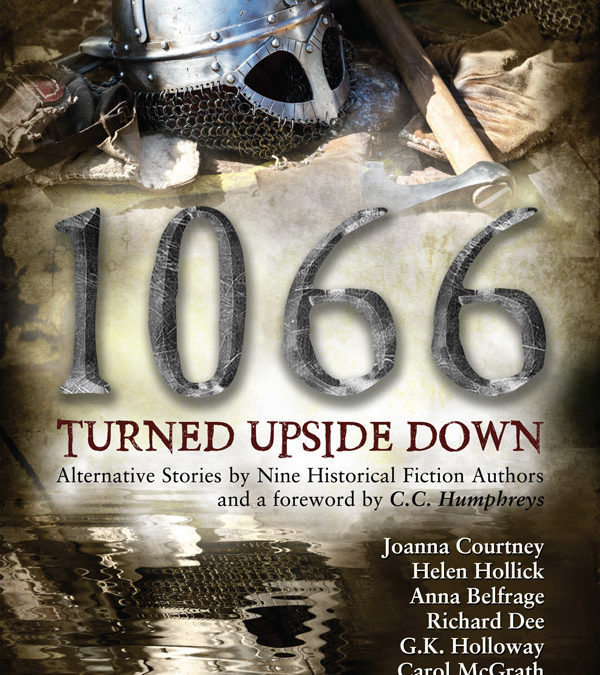 To Crown A King

An appropriate excerpt, for on January 6th in 1066  Harold Godwinson was crowned as King of England…

King Edward, later known as ‘The Confessor’ died on 5th January 1066, just days after his Abbey of Westminster was dedicated to God. Within hours, his Earl of Wessex, Harold Godwinson, was crowned King of England – in unseemly haste, the Normans later claimed. Not so, Edward’s earls and nobles had been at the Christmas Court for many weeks and wanted to return to their lands, the next opportunity for a crowning would not have been until Easter. The ‘haste’ was perfectly normal for English law and custom.

The Normans also claimed that the childless Edward sent Harold to Normandy in the 1060s to offer the crown to William. This would have been highly unlikely: the English earls would not have sanctioned it and it was for the Witan, the Council, to elect a king – usually the eldest son, but it could be the man most worthy to do the job. And there was already a legitimate heir, Edgar, the young grandson of Edward’s half-brother, Edmund Ironside. In 1066, Edgar was only about thirteen years of age…

The murmur of conversation was low within the council chamber, flickering in unison with the draught-disturbed candle flames. All but a few of the Witan were present. Nine and thirty men including two archbishops: Stigand of Canterbury and Ealdred of York.

Archbishop Ealdred stood and cleared his throat. ‘My lords, we must, no matter that it is hard to do so, discuss what we all shy from.’

The light talk faded, grim faces turned to him, men settled themselves on benches or stools, a few remained standing.

‘It is doubted that Edward will survive this night. It is our duty, our responsibility, to choose the man who is to take up his crown, to decide our next king.’ Ealdred folded his robes around him and sat.

Those present were suddenly animated; opinions rose and fell like a stick of wood bobbing about on an incoming tide. Only two names were on their lips: Edgar, the boy ætheling, and Harold.

The two in question sat quiet on opposite sides of the chamber: one asking himself if this was what he wanted; the other, bewildered and hiding his fear. Edgar had never before been summoned to attend the council. It was not a thing for a boy not yet three and ten years of age, this was the world of men, of warlords and leaders. He looked from one to another, listened to snatches of the talk. Earlier that evening he had been immersed in a game of taefl with his best friend – had been winning. He stifled a yawn. Fought against closing his eyes to doze.

For an hour the men debated. Occasionally someone would toss out a sharp question to the boy, who startled awake, or to Harold, seeking opinion, assurance. Edgar answered as well he could. Harold with patient politeness.

‘As I see things,’ Stigand said, his voice pitched to drown the rattle of debate, ‘we have talked of but two contenders. Edgar?’ He beckoned the lad forward. He came hesitantly, not much caring for this direct focus of attention for he was a shy boy.

Stigand continued, not noticing the reluctance. To be king was a thing sanctioned by God, personal feeling did not come into it. ‘He is of the royal blood, but not of age. Second, Harold of Wessex.’ Again the archbishop paused to motion the man forward. ‘He has ruled England on Edward’s behalf and has proven himself a wise and capable man, but there is a third possibility. Duke William of Normandy may claim the crown through the blood-tie of King Edward’s lady mother, Queen Emma – God rest her soul – and through some misguided impression that Edward did once offer him the title.’

Immediately there were mutterings, shaking of heads, tutting. Upstart Norman dukes were unanimously declared as not understanding the civilised ways of the English.

Stigand half smiled, said, ‘I take it, then, that William is excluded from the voting?’

‘Duke William cannot be so easily dismissed,’ Harold interrupted. He waited for the babble of voices to quieten. ‘He will not heed anything said in this room, no matter how scornful or vehement. If he has set his mind on wearing a crown, then he will attempt to take it. If he is rejected, the question will not be if, how, or can he attack us, but when.

Does Harold become king in this alternative history story? Find out in 1066 Turned Upside Down – an anthology of alternate tellings of history 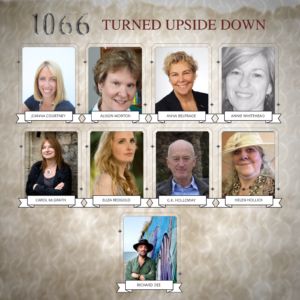 Have you ever wondered what might have happened if William the Conqueror had been beaten at Hastings in 1066? Or if Harald Hardrada had won at Stamford Bridge? Or if Edward the Confessor had died with an heir ready to take his crown? If so – here is the perfect set of short stories for you.

1066 Turned Upside Down explores a variety of ways in which that momentous year could have played out very differently.

Written by nine well-known authors the stories will take you on a journey through the speculative ‘what ifs?’ of England’s most famous year in history.

“1066 Turned Upside Down is the exemplar for how analytical counterfactual history should be done, combining the best elements of fiction and non-fiction to create an immensely impressive achievement.”

“As a collection, the quality of the writing is exceptional and the variety of possible outcomes presented is truly fascinating.”

About Helen: HELEN HOLLICK moved from London in 2013 and now lives on a thirteen-acre farm in North Devon, England. Born in London, Helen wrote pony stories as a teenager, moved to science fiction and fantasy, and then discovered the wonder of historical fiction. Published since 1994 with her Arthurian Pendragon’s Banner Trilogy, followed by her 1066 era duo. She became a USA Today bestseller with her story of Queen Emma: The Forever Queen (titled A Hollow Crown in the UK), and its companion novel, Harold the King (titled I Am the Chosen King in the U.S.A). She also writes the Sea Witch Voyages, a series of pirate-based nautical adventures with a touch of fantasy. Commissioned by Amberley Press she wrote a non-fiction book about pirates in fact, fantasy and fiction and a non-fiction book about smugglers, published by Pen and Sword.

Recently she has ventured into the ‘Cosy Mystery’ genre with her Jan Christopher Mysteries, the first of which is A Mirror Murder. She runs Discovering Diamonds, an independent online review site for Historical Fiction, primarily aimed at showcasing Indie writers.

She occasionally gets time to write. Find her at  www.helenhollick.net