I’m delighted to Welcome Tom Williams to my Blog today to tell us about how he came to write the Burke series, described succinctly by Paul Collard as ‘James Bond in Breeches.’ Over to Tom:

Why James Burke? Would it make any sense to say I did it for the money?

If I’m being honest, it can’t really have been for the money, because I know that writing fiction (and particularly historical fiction) is never going to make you rich. But I started writing about Burke as a (sort of) commercial exercise.

My first novel was The White Rajah. It was based on the life of James Brooke, the first White Rajah of Sarawak. Like most would-be novelists with my first book, I desperately wanted to write the Great British Novel. I was fascinated by Brooke’s character and the history of how he had come to rule his own kingdom in Borneo and I tied this in with ideas about colonialism and the morality of British rule around the world. Just in case I hadn’t weighted the book down with enough “significance”, Brooke was almost certainly gay and there’s a whole subplot about that. And, as the cherry on the cake, the whole thing is written in the first person and (given that this first person was writing in the mid-19th century) not in the most accessible language.

Despite this, I got an agent! And the agent got rejections from every major publisher he approached. It was, they all claimed, “too difficult” for a first novel. “Why don’t you,” he suggested, “write something more accessible? Still historical, but more the sort of thing people are going to want to read?”

I was stumped. I asked friends for ideas. I even asked Jocelyn, an Alaskan tango dancer I’d met in Buenos Aires (as you do).”Why don’t you,” she said “write about the early European settlers in South America? They have some brilliant tales to tell.”

Jocelyn does not like stories with a lot of violence. I think she was looking more at the explorers and the politicians, or even the ordinary people who left Europe in vast numbers to build a new world in the New World. But when I started randomly looking for European figures in the early colonial history of South America, the one who caught my eye was James Burke. 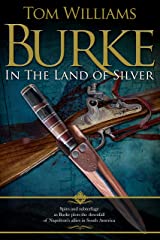 Burke was a soldier, but we have good reason to believe that he spent most of his time as a spy. The first book I wrote about him, Burke in the Land of Silver, is very close to his true story. Sent to Buenos Aires to scout out the possibility of a British invasion, he explored what is now Chile, Peru and Bolivia, returning to Buenos Aires to assist with the British invasion when it finally came.

I’ve obviously never met Burke, but the little we know about him still gives a strong idea of his character. He was an Irish Catholic who had joined the French army because the British Army did not offer an impecunious Irishman much possibility of advancement. We know he was something of a snob, at one stage changing his name to something that sounded more prestigious than Burke. He ingratiated himself with rich and powerful men, but he does seem to have been good at his job. In any case, there was a James Burke on the Army list long after the Napoleonic wars were over, so he did seem to be kept busy doing whatever it was that he was doing.

It’s this uncertainty about his career that makes him an ideal candidate for a series of books. (If you want to sell nowadays, it’s best to write a series – like Deborah’s excellent trilogy based around Pepys’ life.) He was a spy. He moved in the dark and nobody is quite sure what his missions were. So I can make them up. And what a brilliant period of history it is to make up spy stories about. I’m in a long tradition of sales of derring-do about spies during the wars with France, from the Scarlet Pimpernel to O’Brian’s Stephen Maturin and Iain Gale’s James Keane.

Each Burke story is set around a different Napoleonic campaign. After the British invasion of Buenos Aires (Burke in the Land of Silver) we see him in Egypt’s during Napoleon’s invasion that country (Burke and the Bedouin) and in Paris and Brussels during Napoleon’s textile and returned to power (Burke at Waterloo). The latest story (though not told in chronological order) finds him fighting in the Peninsular War, specifically around the battle of Talavera. 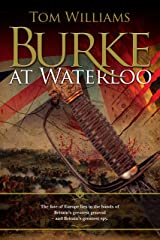 The Burke of Bedouin and Waterloo is entirely fictional, but his adventures in the peninsula are based on another real-life spy, Sir John Waters. In all the books, whether Burke’s adventures are entirely fictional or based on fact, the military and social background is as accurate as I can make it. In fairness I can’t make it all that accurate, but I have gradually found a network of people who really understand the Napoleonic Wars and who have been generous enough to share their understanding with me.

I like James Burke as a hero because he is often far from heroic. Cynical, snobbish, and an inveterate womaniser with an eye for the main chance, it’s easy to dismiss him as an arrogant officer who relies on the solid good sense of his servant, William Brown, to achieve anything. But Brown will be the first to disagree with you, pointing out that when the chips are down Burke will, often reluctantly, always do the right thing. The fact that the right thing isn’t always what his military masters would want him to do, just makes it more interesting. When push comes to shove, he is not only physically but morally brave.

I have come to be quite fond of James Burke. His next adventure will see him in Ireland in 1793 where he is charged with infiltrating the Irish nationalist movement. Perhaps this early mission explains much of his cynicism, for it is his darkest and most morally dubious adventure in the series. But that’s to come. For now, we can relax and enjoy the fun as his schemes, fights, and romances his way through the chaos that is the Peninsular War.

Burke in the Peninsula will be published on 25 September. It is available on Amazon at £3.99 on Kindle and £6.99 in paperback.

You can read more by Tom Williams on his blog, http://tomwilliamsauthor.co.uk/. His Facebook page is at https://www.facebook.com/AuthorTomWilliams and he tweets as @TomCW99.

And The White Rajah did eventually see publication and is worth your time. Here’s the link: mybook.to/TheWhiteRajah

Tom Williams is the author of several historical novels, including The White Rajah’ which I really enjoyed. ‘Burke in the Land of Silver’ is a tale of spies and skulduggery in the Napoleonic Wars as Britain invades Argentina. You can read about Tom’s research for this novel on his blog. James Burke never set out to be a spy.

But with Napoleon rampaging through Europe, the War Office needs agents and Burke isn’t given a choice. It’s no business for a gentleman, and disguising himself as a Buenos Aires leather merchant is a new low.

His mission, though, means fighting alongside men who see the collapse of the old order giving them a chance to break free of Spanish colonial rule. He falls in love with the country – and with the beautiful Ana.

Burke wants both to forward British interests and to free Argentina from Spain. But his new found selflessness comes up against the realities of international politics. When the British invade, his attempts to parley between the rebels and their new rulers leave everybody suspicious of him. Despised by the British, imprisoned by the Spanish and with Ana leaving him for the rebel leader, it takes all Burke’s resolve and cunning to escape. Only after adventuring through the throne rooms and bedrooms of the Spanish court will he finally come back to Buenos Aires, to see Ana again and avenge himself on the man who betrayed him.

Tom lives in London and when not writing, enjoys skiing, skating, and dancing tango, preferably in Buenos Aires.