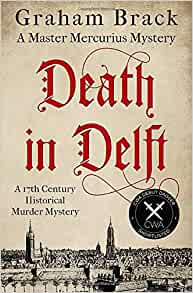 This is the first Master Mercurius novel I’ve read, but it won’t be the last. Set in the immaculately detailed setting of 17th Century Delft, Master Mercurius is a character it is easy to warm to.  An undercover priest as well as a protestant cleric, he is keen to do the right thing in the spirit rather than the letter of the law, and has a dry sense of humour that is a good foil for the beastly business of solving murders.

In this case we have a dead girl and some other missing girls we fear for, and it’s a race against time for Mercurius to discover and flush out the kidnapper, before the dastardly murderer kills another.

One of the joys of this book is all the supporting characters we meet along the way. We get an intimate view of Vermeer described as having: an intensity of gaze I found unsettling, as if he really saw all there was to see, open or concealed.

We also get a view of scientists of the time such as the ‘polite’ Van Leeuwenhoek who is just experimenting with lenses to view what lives in our saliva – to Mercurius’s amazement. Of course there are plenty of clues for him to follow and a satisfactory wrap-up to the plot.

A well-researched, tightly-plotted treat. I highly recommend, and will be reading another soon.